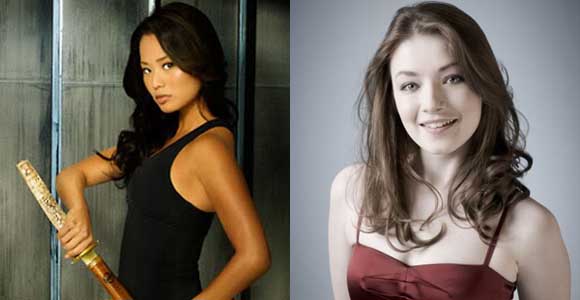 Well this is really awesome news. ABC’s hit fairytale drama Once Upon a Time has cast two new literary characters to their ranks – Mulan and Sleeping Beauty! Actresses Jamie Chung and Sarah Bolger get to bring the leading ladies to life. Hit the jump for more details!

I’ve been wondering what the folks at OUAT were planning for Season 2. Season 1 consisted of a lot of stories for a lot of characters, though a few key figures were missing, and things were left on an interesting cliffhanger in the finale episode. Well we now know they’ll be adding at least two fan-favorite characters to the mix.

Entertainment Weekly reported ex-Real World castmember, current actress, Chung (Sucker Punch, Hangover 2) would be playing Mulan. They say she’s expected to have a recurring role and is described “as having been trained in weaponry, tracking and riding, but ‘has a spirituality that enhances her tactical and strategic abilities. She has suffered past betrayals, so her trust is hard-won, but once she gives her oath of friendship her loyalty knows no boundaries.’ Also, ‘when she falls in love, she falls hard.’”

Mulan of course was an animated hit for Disney in 1998 but was based on the Chinese poem about Hua Mulan, a young woman who dressed like a man and took her aging father’s place in the army.

Former child actress Bolger (In America, The Tudors) is set to play Sleeping Beauty. TVLine had the news and named her as Princess Aurora. It’s interesting timing considering the updated take Disney is doing on the big screen with Angelina Jolie’s Maleficent. We’ve seen the character played on the show already by True Blood’s Kristin Bauer van Straten and I, for one, have been eagerly anticipating Aurora’s arrival.

EW writes, “The Once Upon version of Aurora is described a spoiled girl from a privileged background who’s willing to ‘sacrifice everything for love.’” Will we see her put Storybrook to sleep with a spinning wheel?

The descriptions may be talking about love for both of these new additions but don’t worry about them. The creators of the show have a good handle on their female characters.

“We did not want to have the damsel in distress,” writer Adam Horowitz told the Hero Complex earlier this year. “We did not want to have the princess who needs saving.” Co-writer Edward Kitsis added, “We were interested in writing really tough women that were not afraid to use power because we feel like that’s what’s relevant today and that’s what’s interesting as writers.”

Anyone who watches OUAT knows the ladies of Storybrook are fierce. Personally, I can’t wait to see where they go with Season 2. Now if they’ll just give us a premiere date…

Previously in Once Upon A Time