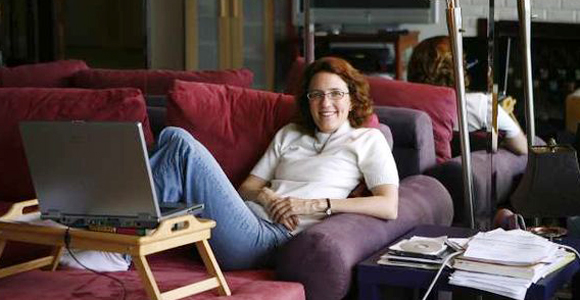 Jane Espenson has a resume that makes most writers (myself included) very jealous. She’s worked on Buffy the Vampire Slayer, Battlestar Galactica, Torchwood, Dollhouse, Game of Thrones and Warehouse 13 just to name a few. I recently added a new high point to my geek life when I got to speak to Espenson on my podcast with Alan Kistler, Crazy Sexy Geeks. We spoke about her new gig on ABC’s Once Upon A Time, her marriage equality web series Husbands, how young women writers can break into the industry and more! Hit the jump for some highlights.

Espenson has been working on a new web series with Jeff Greenstein. Husbands revolves around a couple, Brad Bell and Sean Hemeon who wake up married after a crazy night in Vegas. “It’s very a classic conceit of a romantic comedy, that thing of ‘we’re thrown together and we don’t know if we love each other yet but boy we’re a good team and sure enough we realized that this marriage may be the best thing that ever happened to us’ because they do love each other,” said Espenson.

The show also stars Espenson’s Caprica cohort Alessandra Torresani and a cameo by none other than Nathan Fillion. Oddly enough, when originally conceived, Husbands wasn’t about a gay couple. But after some discussions, the creators realized it could work. “This show has to be done, is inevitable, someone will do it but shouldn’t we be the ones to do it,” said Espenson. “We ended up with this project that looks like a sitcom but is absolutely current to the moment. We’re all very proud of it. We sort of feel like we’ve proven there’s an audience out there for this kind of content.”

Espenson has also been making waves with ABC’s new hit fairy tale drama, Once Upon A Time. “There’s some more surprises coming up,” she teased, mentioning that besides acting as consulting producer on the show, she’s also writing six of the first 22 episodes.

“I think TV is finally realizing what features have realized for a very long time which is, there’s nothing marginal about fantasy or sci-fi content,” she said. “In fact, that’s the tentpole content. That’s what people want, the escapism and imagination and metaphorical storytelling that you get with genre that allows you to actually look and comment more honestly on our world.” You can see Espenson’s next episode on January 8th which will focus on Rumpelstiltskin.

Espenson has worked hard to get where she is today but had some interesting starts in Hollywood. One of which was writing a Star Trek: The Next Generation spec script in an open submission process. That sort of thing is unheard of today but she also thanks the ABC Disney Writer’s Fellowship, saying that’s what really got her in the door. That program is now in its 20th year.

The writer/producer was also lucky enough to be part of another high profile television show recently, Game of Thrones, the adaptation of the first book in George R.R. Martin’s A Song of Ice and Fire series. She wrote the episode no one could forget, A Golden Crown. She also had great praise for the book’s author. “His ability to weave these stories so that stuff that was planted in book one pays off in book four…I know how hard that kind of serialized storytelling is because it’s the same thing we do in TV,” she said. “It’s very hard to do that because you don’t get to go back and rewrite everything to make it fit what you later changed so it’s very hard and the way he does it is so seamless.”

I must admit, it was an absolute thrill getting to speak with someone I look up to as much as Espenson. Find out even more about what I previewed here, what she’s currently watching, her experience working on the recent season of Torchwood and what her geeky pleasures are by listening to the podcast (also available on iTunes).