Are These America’s Most Depressing Professions? 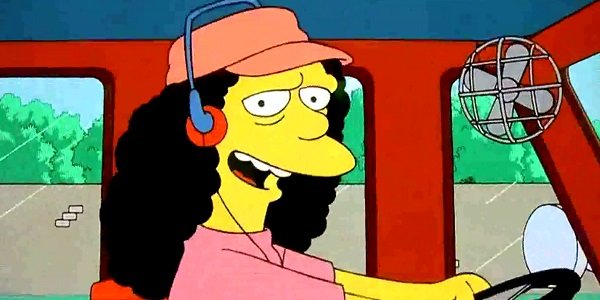 Be nice to your bus driver, guys—if new research is to be believed, people who work in passenger transit are far more likely to be depressed, than, say, coal miners. Frankly, I’m a little dubious. Maybe be nice to everyone, just in case?

Prevalence Rates for Depression by Industry, a new study published earlier this week in Social Psychiatry and Psychiatric Epidemiology, analyzes data from medical claims filed between 2001-2005. The claims came from 214,413 employed adults and were filed with Highmark Ltd., “a Blue Cross Blue Shield insurer providing health insurance for the majority of the working population.” The majority of the compiled data was from Western Pennsylvania.

For the interests of the study, ‘depression’ was indicated by two or more claims filed under codes indicating ‘major depressive disorder.’ Disabled employees were not included in the analysis. Fifty-five different industries with 200-plus employees are represented in the data below. Professions where depression appeared most prevalent are indicated in red, least prevalent, blue. 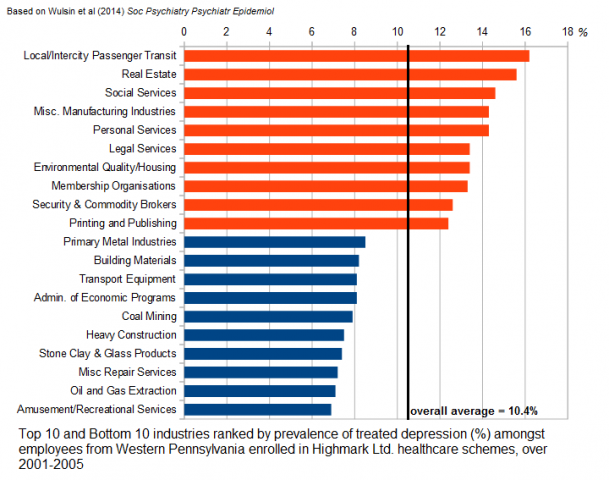 The researchers write that the “Industries with the highest rates [of depression] tended to be those which, on the national level, require frequent or difficult interactions with the public or clients, and have high levels of stress and low levels of physical activity,” and say similar methods of analysis “may provide a cost-effective way to identify priorities for depression treatment and prevention in the workplace.” However, as Discover points out, if your job is in the red, that doesn’t necessarily mean you should be feeling blue.

Aside from the age of the study’s data data and the narrow field it was drawn from, (perhaps there was something particularly soul-crushing about being an insured bus driver in Western Pennsylvania in 2003?), Discover notes that findings from a 2012 UK study directly contradict this newer research. In examining the suicide rates in different professions from 2001-2005, the 2012 analysis found that blue collar jobs actually had the highest rates of suicide, with coal miners actually being the most at-risk.

The Western Pennsylvania analysis also obviously could not account for workers in the 55 professions who weren’t insured, didn’t have mental health coverage, or were dissuaded from reporting mental health problems because of the accompanying stigma. It’s also worth noting that just because depression may appear more prevalent in a specific job does not necessarily mean the job itself is the root cause.

The researchers admit that the correlation between mental health and working conditions requires more exploration:

Additional research is needed to help identify industries with relatively high rates of depression in other regions and on the national level, and to determine whether these differences are due in part to specific work stress exposures and physical inactivity at work.

(via Discover and io9, image via The Simpsons and PubMed)