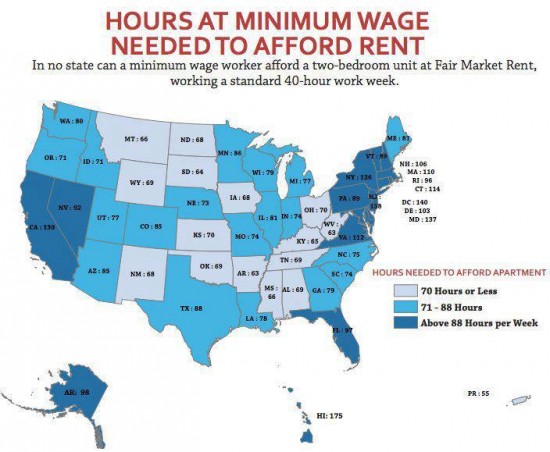 Hey guys, just because you might’ve been having a good day, here’s a depressing chart about the quality of apartment life in the United States. Whether it’s somewhere expensive like New York, or somewhere cheaper like Ohio, minimum wage in any state in the country cannot afford a two bedroom apartment.

If you’ve ever been apartment hunting, you probably already know that it ain’t no picnic, but the above chart lets you know, at least, that it ain’t no picnic anywhere else. The minimum amount of hours working on minimum wage that can afford a two bedroom apartment is 70 hours per week, while the more “attractive” states, like California, Florida, and New York require over 88 work hours per week. If you’re wondering, there are only 168 hours in a week. If you pulled down minimum wage in New York City, and tried to afford a two bedroom apartment, you’d be working more hours (88) per week than you wouldn’t be working (80). If you’re trying to sleep by the old standard of 8 hours of sleep per night, you’d be sleeping 56 hours per week, which leaves you with only 32 hours of leisure time over the course of seven days.

Now, it’s worth noting that not everyone making minimum wage would be trying to afford a two bedroom apartment by their lonesome, and generally speaking, people attempting to rent a two bedroom apartment would probably have a roommate who also has some kind of income. However, there are situations wherein a roommate that pulls down an income isn’t possible, such as a single parent that needs another bedroom for a child.

The numbers in the above chart utilize the list of minimum wages by state found over on Wikipedia, coupled with any given state’s Fair Market Rent figure. The FMR system provides a handy set of menus that allows one to check out the average rent of any given area in a state. Play around with that if you want to see how much cheaper life would be somewhere else, but be warned, it can get pretty upsetting that a four bedroom apartment near a beach in some other state is cheaper than your one-and-a-half bedroom, two roommate apartment where all the windows somehow face a brick wall.