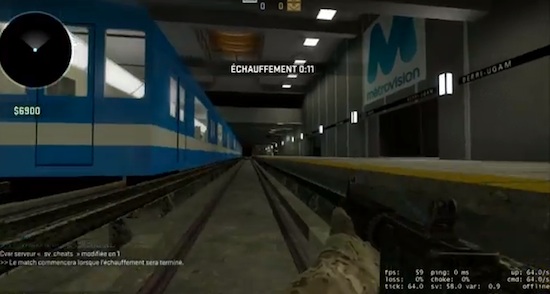 Counter-Strike maps of real places are nothing new, but getting sued over making one is a new one on us. That’s exactly what seems to be happening to map builder Diego Liatis, whose recreation of Montreal’s Berri-UQAM subway station is so good, the Société de transport de Montreal, which operates the city’s subways, is threatening to sue him if he doesn’t shut the project down, citing the fact that the map could cause panic among subway riders. That’s right, Montreal subway riders — the Société de transport de Montreal (STM) doesn’t think you can tell the difference between real life and Counter-Strike.

The map — which sees players work to fight terrorists and disarm a bomb, because duh, Counter-Strike — is a pretty painstaking recreation of the actual subway stop, which is exactly STM’s problem with the project. They’re not technically suing Liatis yet, but they’ve made it clear that’s exactly what they intend to do if he releases his map, which is still in development right now. But the letter they sent him makes clear that they’re not delighted with the use of their station as a staging ground for a digital terrorist attack, reading in part

“The STM has notified you that it did not allow for this project, the use of his image and the reproduction of said station,”

You can take a look at a walk through of the station — er, level — below.