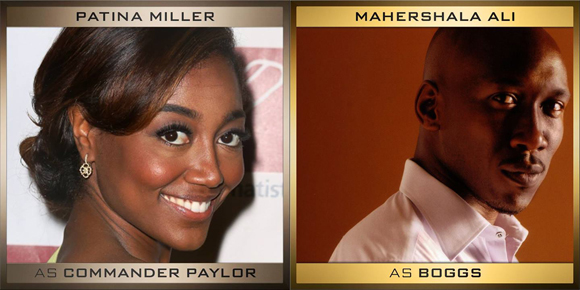 We’ve been seeing a lot of casting announcements for the third and fourth installments of The Hunger Games franchise recently. There isn’t anything unusual about it considering production times but as a fan I’m finding it difficult to place my excitement. I have to be freaking out over Catching Fire before I can freak out over Mockingjay, right?

The Hunger Games: Mockingjay Part 1 & 2 has already cast Natalie Dormer as Cressida, Stef Dawson as Annie Cresta, Evan Ross as Messalla, Julianne Moore as President Coin, and Lily Rabe as Commander Lyme. And it’s a good thing because they’ve already started pre-production on the two-parter with some of the cast already in Atlanta, Georgia.

Most recently, Broadway star Patina Miller joined the cast as Commander Paylor. She’s a leader of rebels from District 8 who doesn’t seem all that important at first but who plays a more significant role later on. This will be Miller’s first feature film role.

Then there’s Mahershala Ali, who you might know from his more recent work in House of Cards or Alphas or his previous role in The 4400. He’ll be playing Boggs, someone close to President Coin who takes on the role of Katniss’ bodyguard.

There aren’t too many characters left to cast for the last two films, though I’m still anxiously waiting to see who will be Tigris. I’m holding out hope for Rebel Wilson.