The Hunger Games: Mockingjay Has A New Cast Member 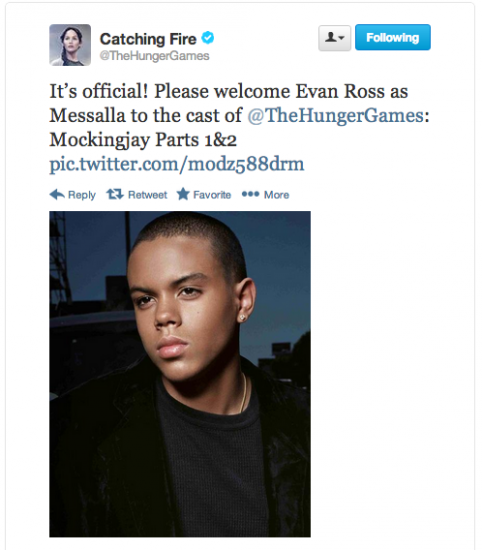 For those who need a reminder, Messalla is the assistant to propaganda film director Cressida, to be played by Natalie Dormer. It’s not a particularly big role, if memory serves, but hey, any bit of diversity in the Mockingjay cast is good. And for a bit of actor trivia: The 25-year-old Evan Ross is the son of Diana Ross.

Speaking of diversity: Who are the characters introduced for the first time in Mockingjay? The only ones I can think of are Annie Cresta and Alma Coin, but it’s been a few years since I’ve read it. I’m just trying to think of characters with a bit more screentime than “Cressida’s assistant” who could, if played by a POC, make the currently rather white-looking movie a bit more balanced.

Warning: Beware spoilers for Catching Fire and Mockingjay in the comments.