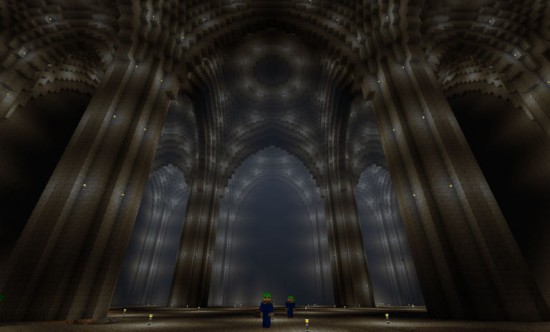 When we think of the Mines of Moria, we think of either Gimli’s crib or the place where Gandalf got crunk with the Balrog. But when Redditor and Minecraft enthusiast Tigerballs07 saw the Mines of Moria in Peter Jackson’s The Lord of the Rings: The Fellowship of the Ring, all he saw was virtual 1-cubic-meter blocks. For roughly a year, Tigerballs07 and a team of over 40 volunteers worked to create a 1:1 scale replica of Middle Earth’s Mines of Moria. Read on for a little more about this tremendous project, gallery included!

The original post was entitled, “Minecraft Moria – Built to Scale – Hand Dug – Details in comments.” I was immediately intrigued. I then realized that there were well over 1,000 comments to wade through to actually get to the details mentioned in the title. I was suddenly much less intrigued. After a few minutes of wading, however, I found the details of which Tigerballs07 had spoken.

The structure is 16,000 x 16,000 blocks and took tens of thousands of man hours to complete. The entirety of the structure was “Hand-Dug,” which mean that no mods were used to simplify the building process within Minecraft. The replica is based on Peter Jackson’s vision of Moria and not J. R. R. Tolkien’s description. The replica features all of the iconic locales featured in the film; with everything from the entrance to the bridge on which Gandalf confronts the Balrog.

This is not the first massive project that user Tigerballs07 has undertaken, having also completed a 1:1 scale replica of the German World War II battleship Bismarck (which can be found here). I hope you weren’t planning on downloading the map, because according to the reddit thread, the map would take 2 to 3 days to upload and, therefore, has not been put up for download.