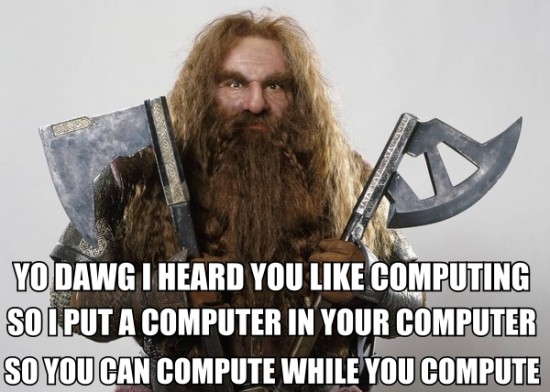 Continuing today’s theme of incredibly ambitious projects carried out in city-building games — someone has created a Dwarf Fortress city that operates, effectively, as a Turing machine.

No, it’s not called “MOAR-ia.” Although it should be.

For the uninitiated, Dwarf Fortress is to normal city-building games as the UNIX command line is to Windows: abstruse, catastrophically punishing of newbie mistakes, unfailingly esoteric in documentation, and thoroughly opaque in operation.

Also, the interface is entirely composed of ASCII-based graphics. Scared yet?

Let’s examine what happens when I actually use this “computer” to perform calculations: (1) My input (2) enters the Dwarf Fortress city (3) whose behavior is governed by the Dwarf Fortress engine, written in C++ (4) which is running in WINE (5) in a GNOME Ubuntu window environment (6) running on a Linux kernel, written in C (7) which converts instructions into microcode (8) for the AMD processor inside.

Good heavens. The commenters in the Dwarf Fortress forums have it right:

A scrollable map of the city is here; the creator’s design document can be found here.