Is Milla Jovovich Getting Ready To Kick Butt In The Expendables 3? 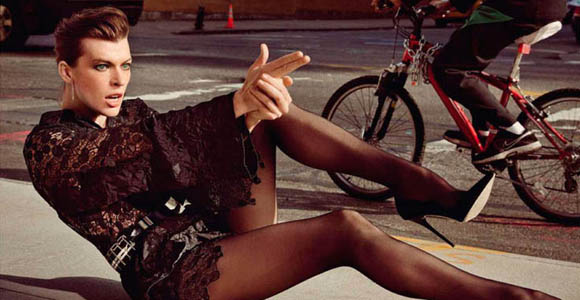 Milla Jovovich has made a career out of punching and kicking so it’s no surprise to hear she might be joining the cast of The Expendables 3. But what does this mean for The ExpendaBelles?

Jovovich was at the top of my list for women who should have been included in The Expendables sequel but once again, no female action stars were chosen. Seeing a huge opportunity to make tons of cash, an Expendables-style film featuring all women was put into the works by Adi Shankar’s 1984 Private Defense Contractors. No one was officially involved at the time but names like Angelina Jolie, Helen Mirren, Michelle Rodriguez, Jamie Lee Curtis, Zoe Bell, Michelle Yeoh, Kate Beckinsale, Summer Glau, Sigourney Weaver, Linda Hamilton, Lucy Lawless, Jennifer Garner, Pam Grier, Sarah Michelle Gellar, and Lucy Liu were thrown around to fill the pool. Katee Sackhoff and Gina Carano were eventually added to the cast.

And then the folks who actually do The Expendables were like, “Hey, that’s a great idea!” and decided to start work on The ExpendaBelles. Millennium Films hired Legally Blonde writers Karen McCullah Lutz and Kirsten Smith to do the screenplay but we haven’t heard any updates on it for a while. Though considering what Sylvester Stallone had to say late last year, it seems there’s a chance it could be folded into the main franchise. “There’s another combination, and it involves girlfriends. Say I got divorced, say I am married to Sigourney Weaver, then she gets half the Expendables, she gets what I call The Expendabelles,” he said. “So I need help and I have to go to her. And I’d like to have like Michelle Rodriguez, Gina Carano. It’ll be something like that, very different.”

Blah, blah, blah, girlfriends, wives…these ladies don’t need to play second fiddle, they can carry a film on their own.

The latest news however, gives us the possibility of three new men and one woman joining the fray. Lionsgate CEO Jon Feltheimer told analysts they’re currently in negotiations with Jackie Chan, Wesley Snipes, Nicolas Cage, and Jovovich. The model/actress has been the star of the Resident Evil franchise since 2002 and has roles like The Fifth Element, Ultraviolet, and .45 on her resume as well.

I think it’s a great idea to add a women to the cast of The Expendables 3 based on their past action work but I’m still looking forward to an all-female cast in this same vein.