The Long Arm of the Lore: Female Heroes In Pop-Culture 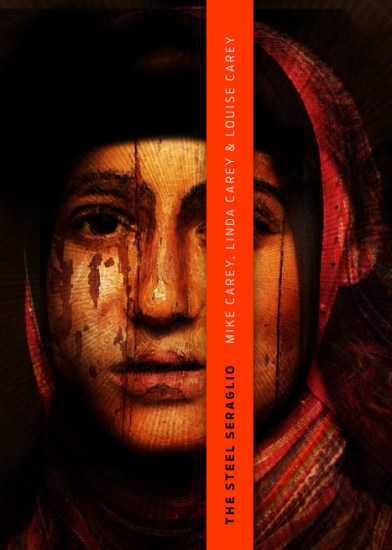 Editor’s Note: Writer Mike Carey is best known for his comic book work on titles like Lucifer, Hellblazer, and the Eisner and Hugo Award nominated The Unwritten. His wife Linda Carey, and their daughter Louise Carey, are also authors and all three have collaborated on a new book called The Steel Seraglio from ChiZine Publications. Because the story revolves around a strong female heroine (an army of ex-harem members to be exact), the Carey’s decided to write a guest post for us about that popular trend. Read ahead for their thoughts on how The Hunger Games factors in, what they prefer to see in their heroines, and for a sneak preview of The Steel Seraglio.

There was a piece here on the Mary Sue recently about The Hunger Games movie, and how it defied expectations to out-gross a lot of male-centred actioners in a hugely successful opening weekend.  Jill’s conclusion, which is hard to argue with: something wrong with those expectations, then, wasn’t there?  All the conventional arguments about what you can and can’t do with a movie that has a female lead start to look less like industry wisdom and more like enshrined stereotyping.

The same was true of the books by Suzanne Collins on which the movie was based, which were credited with almost single-handedly lifting publisher Scholastic’s share price and taking their balance sheet back into the black.

So kick-ass heroines are cool again, which has to be a good thing, and a lot of commentators are noting, in addition, that Katniss’s heroism has more than one strand to it.  She’s a provider for her family (her skills with a bow are picked up in hunting, not in combat) and a ferocious protector of her younger sister (she gets into the games not through a desire to fight but to keep Primrose from going).  She’s not just a guy in drag, in other words: she’s a believable and fully rounded character, admirable in a whole lot of ways and easy to identify with.  She has a social context, and she makes sense.

Sad, then, to see critic Jeffrey Wells on Hollywood Elsewhere attributing the movie’s success to “reviews by certain female critics” who are “susceptible to the lore of this young-female-adult-propelled franchise”.  Umm… yeah.  A cabal of female critics has conspired to big up a bad movie because it’s got a girl in it.  Those bastards!  When will somebody finally take them down?

We’re not sure what “susceptible to the lore” really means, in this context.  If you’re susceptible to a story, it’s because the story works for you – which is what you came for, right?

We’ve  always been baffled by the idea that young boys – or grown men, for that matter – should find it hard to identify with a female protagonist.  Our imaginations don’t have genitals (although you could argue that they sort of have secondary sexual characteristics).  Is it impossible to enjoy a Denzel Washington movie if you’re white?  The Station Agent (starring Peter Dinklage) if you don’t have achondroplastic dwarfism?  A Bug’s Life if you’re not… okay, this is just silly, isn’t it?

And what about ensemble casts, stories with multiple protagonists?  When you watch Firefly, do you gravitate more towards Mal if you’re a white guy, more toward Zoe if you’re a black woman?  That’s certainly not our experience.  Part of the joy of that show, and of Buffy before it, was that it let you get into the heads and the hearts of all its characters.  You get to be all of them, to position yourself with all of them, and there’s no sense of strain in that, no bumps or jolts.

We prefer our heroines, just like our heroes, to be real people, not cardboard cut-outs – which, in the end, means that their gender isn’t going to be their determining trait.  It’s part of their identity, sure.  How could it not be?  But it doesn’t define them, any more than a score of other things define them.  It’s in the mix, that’s all, and it shouldn’t make a difference to how the reader responds to them.

As it happens, in the novel we’ve just co-written for Chizine Publications, The Steel Seraglio, there’s a huge preponderance of female protagonists.  The novel is about the women of a harem in an ancient Middle Eastern kingdom, who forge themselves into an army after they’re exiled from the city of their birth – and then come back to claim the city for themselves.  So it’s a story that’s partly about gender politics, and it has a number of women who make the same journey, together, from being possessions and playthings to being completely in control of their own lives and fates.  Except that many of them had their strengths and their stratagems already, even when they were in the harem: they were trapped in a situation, but they worked within it to give themselves and each other whatever freedoms they could find or make.

We’d be really depressed to think that by making that a central focus in the book, we’d made it impenetrable or repugnant to male readers.  But we don’t think that at all: everything in our experience as readers and viewers argues against it.  There’s a wonderful aphorism, quoted by Liz de Jager on her My Favourite Books blog, about the power of fiction: Anyone who says they have only one life to live must not know how to read a book.

If we could only enjoy stories about people exactly like us, characters who function like Wii avatars for us, how cold and poor and pointless the whole enterprise would be – like a choose-your-own-adventure where all the important choices had been made for you before you started.

Linda, Louise and Mike Carey are three writers living in North London. Sometimes they write together, sometimes alone. Louise wrote The Diary of a London Schoolgirl for the website of the London Metropolitan Archive. She also co-wrote the graphic novel Confessions of a Blabbermouth with Mike. Linda, writing as A.J. Lake, authored the Darkest Age fantasy trilogy. She has also written for TV, most notably for the German fantasy animation series Meadowlands. Mike has written extensively in the comics field, where his credits include Lucifer, Hellblazer, X-Men and The Unwritten (nominated for both the Eisner and Hugo Awards). He is also the author of the Felix Castor novels, and of the X-Men Destiny console game for Activision. He is currently writing a movie screenplay, Silent War, for Slingshot Studios and Intrepid Pictures. They share their crowded house with two other writers/artists, a cat, and several stick insects.

Click here for a PDF excerpt from the Carey’s novel, The Steel Seraglio, and watch the trailer.