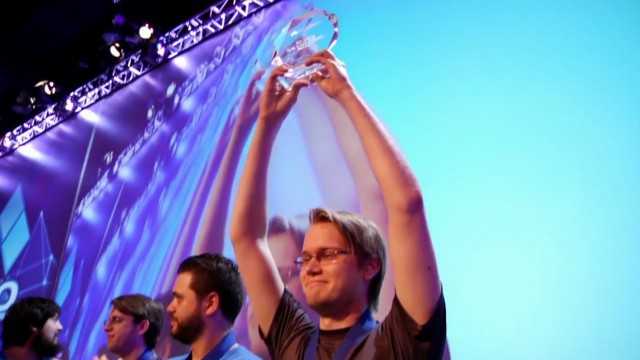 Yeah, you read that right: a 14-year-old game that’s had two sequels became, not for the first time in its lifespan, the most-watched fighting game ever at this year’s massive Evo 2015 fighting game tournament with 205 thousand viewers as Adam “Armada” Lindgren took first place over Juan “Hungrybox” Debiedma in grand finals. It’s time to pay attention to eSports.

That might sound like an odd statement considering that the viewership records it broke were those of other eSports, which seems like an odd metric to judge the relevance of eSports by. But I don’t think it’s possible to overstate the importance of how Melee‘s resurgence was propelled by live streaming on platforms like Twitch. The game came out on the GameCube in December 2001 (in the U.S.) and enjoyed a flourishing tournament community, mostly centered around SmashBoards.com (once Smash World Forums, which launched in 2002), during its reign as Nintendo’s current Smash Bros. title.

The game was so popular, in fact, that even before the current gameplay streaming boom, Major League Gaming purchased SmashBoards in 2008—just a few months after the introduction of Melee‘s sequel, Super Smash Bros. Brawl. However, Brawl resulted in a rift in the community, as many saw it as “less competitive,” meaning it didn’t lend itself as well towards deep, strategic tournament play.

We won’t get into that topic here, because we don’t need the flame war that goes with it, but differing perspectives on the game’s sequel were definitely a stumbling block just as Smash was gaining popularity as more than just a party game. Despite being favored by many prominent players, Melee was seen as “the past” by a lot of the Smash series’ growing following, and the split in the community between the two games made things rough for a while.

Melee had appeared in the Evo 2007 game lineup before Brawl hit the scene, but in 2008, it was replaced by the newly-released Smash Bros. Brawl at the event, and with Brawl unable to recapture Melee‘s tournament popularity, Smash was absent from Evo for years to follow. But then, in 2013, Melee returned to Evo, and it’s been there every year since with crazy—and sharply escalating—viewer numbers.

For now, Smash Bros Melee is the most watched fighting game in history, with 100k concurrent #evo2013 viewers!

So what happened? How did a then-12-year-old game, which still needs to be played on old, clunky, heavy CRT TVs at tournaments for lag purposes, suddenly not only return to popularity, but consistently break viewership records for fighting games?

The answer is eSports and online streaming. Just when the Smash community was splintering over Brawl‘s tournament worthiness, video game streaming was growing rapidly in popularity. Of course, YouTube “combo vidoes” and videos of tournament gameplay already existed, and so did some small streaming sites, but Twitch’s launch in 2011 and subsequent success has really established the timeline of eSports viewership popularity.

Suddenly, fans didn’t have to attend events in person or find replay videos on YouTube. There was now a place for everyone to get together, watch video games, and put their eyeballs on whatever they wanted to see most—not just what was newest and in the most homes, as Brawl substantially outsold Melee (though not by as much as the Wii outsold the GameCube). And no matter what side of the Melee vs. Brawl argument you fall on, the fans have spoken, and Melee is what people want to see.

It’s no coincidence that Melee‘s sudden return to widespread popularity after a few years of faltering tracked right along with the rise of eSports streaming. The Smash community is undoubtedly a dedicated bunch that deserves a lot of credit for sticking by the game and the 2013 charity drive that restored Melee to Evo in the first place, but it’s a testament to the power of “televised” eSports that a game I’ve been playing for nearly half my life has made a comeback and is still smashing its newer, shinier competition.

With viewer numbers doubling in just two years, Evo, Smash, and eSports are set to enjoy a very exciting future, and we’ll be watching.