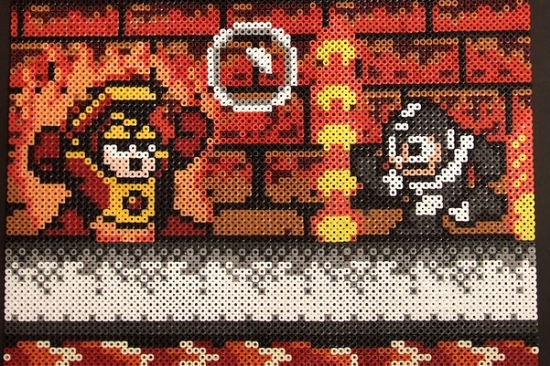 In the olden times of video game history, consoles didn’t have built in storage. Some games had to be beaten in one sitting or not at all. A primitive method of saving one’s progress was for games to offer passwords to players. Some game passwords just brought the player back to a point in the game’s time line, but the Mega Man games were more complicated. There wasn’t one set order of levels, so passwords had to mark which levels were or were not beaten. Now, almost 25 years later, someone has cracked the code used to generate Mega Man 2 passwords. My five-year-old self just got very excited.

The passwords in the game were entered into a five by five grid, and each password consisted of nine dots being placed on that grid. Each of the eight levels had one box to check if it had been beaten, and one to check if it had not. That means that of the nine bits in each password, eight of them are used to keep track of which levels still need to be beaten. The last piece of each password keeps track of how many E-tanks, which fully recharge health, Mega Man has left.

Kevin Shekleton figured out which spaces on the grid control which aspect of the game and wrote a generator allowing people to create passwords for different game configurations. It wasn’t as simple as just marking which box deals with which level, this is a code after all. It turns out that the number of E-tanks changes which squares on the grid deal with which levels. It’s a little complicated, but you can check out his generator on GitHub.

The Mega Man games each had a set order in which players were supposed to defeat the bosses since some acquired weapons were particularly effective against certain opponents, but being able to take out any of the bosses you want means I can finally start with the Crash Bomber equipped. Thanks, Mr. Shekleton!

(GitHub via Geek.com, image via RedHerring1Up)