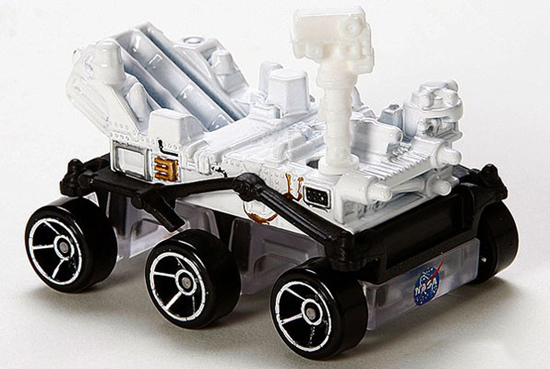 Mattel is no stranger to crafting novelty toys based on current events. They’ve even made NASA-based miniatures before, like the Sojourner rover. They have decided to do so again with NASA’s Curiosity rover; a 1:64 scale Hot Wheels version of the craft will be available after the landing event this coming weekend. The coolest parts, like the sky crane and parachute deployment, will sadly not be included, much like the batteries of yesteryear.

Even without the cool extra gadgetry, Mattel casting the rover at all is exciting. The fact that the global community, and especially the Internet, has taken a special interest in the landing and mission is enough to give hope for humanity. When we, as a people, stop finding these kind of developments fascinating is a time I never want to see.

The die-cast model is fairly detailed for a 1:64 scale version and even includes a little NASA sticker on the front of it. With an imagined sky crane and parachute made of some string and napkins, kids will be able to take part in their very own Mars landing mission. That’s not to say adults won’t do so as well; they’ll just likely have better equipment available to them to rig up some actual semblance of a sky crane and a legitimate parachute.