Shhhhh. It's a secret. 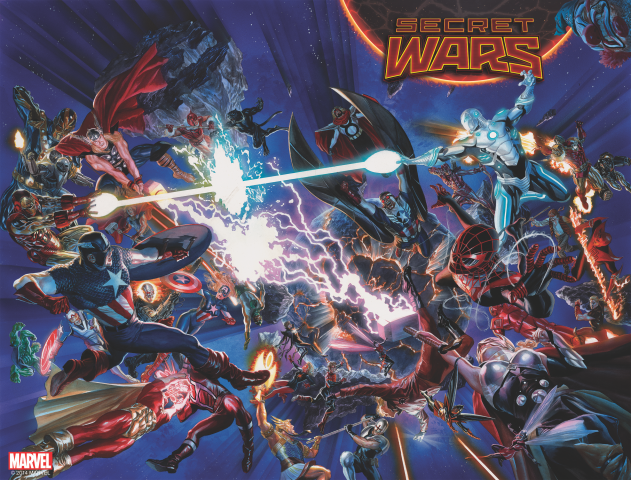 Last night at the S.T.A.T.I.O.N exhibit in Discover Times Square, Marvel announced what they’ve called—a new Secret Wars storyline. Well, it can’t be a very good secret if they’re telling us about it, can they? /Jokes

In case you’re not up on your comics knowledge, the original Secret Wars was a 12-issue crossover event from 1984 to 1985, written by Jim Shooter with art by Mike Zeck and Bob Layton. In it, the Avengers, the Fantastic Four, the X-Men, Spider-Man and Spider-Woman, and a number of villains in a no-holds barred fight against each other on an alien world. There was also a very popular Secret Wars toy line as well.

The new storyline will be written by Jonathan Hickman with art by Esad Ribic, and is set to begin next year in May 2015. According to Dan Buckley, Marvel’s President & Publisher of print, TV and digital, Hickman’s been planning this new arc since before he began working on New Avengers, back when he was still on the Avengers title, and wants to pay homage to the original while still telling the story in a new and interesting way.

“When Jonathan brought this to us, we had an opportunity to just not celebrate this in publishing, so we’re going to be extending this in a year-long program into 2016 with our merchandising partners, digital partners and other partners,” Buckley told the crowd at S.T.A.T.I.O.N.

In addition, Marvel also announced a prime time special for Marvel’s 75th anniversary will air on November 4th in place of Marvels: Agents of SHIELD on ABC. And it will be hosed by Sharon Carter herself, Captain America: The Winter Soldier‘s Emily VanCamp. Cool, something for her to do that’s not just watching Steve Rogers be awesome!

Obviously this is an exciting new development for longtime Marvel fans. But because I am a giant dorkasaurus, I am going to leave you with this instead: I can’t not picture 30 Rock’s Jenna Maroney singing a little nefarious song about the Secret Wars like so:

Try to get that out of your head today. Just try. YOU’RE WELCOME.