This is Not a Drill: Marvel Announces Unbeatable Squirrel Girl Ongoing Series

It's a good day to be a Great Lakes Avenger. 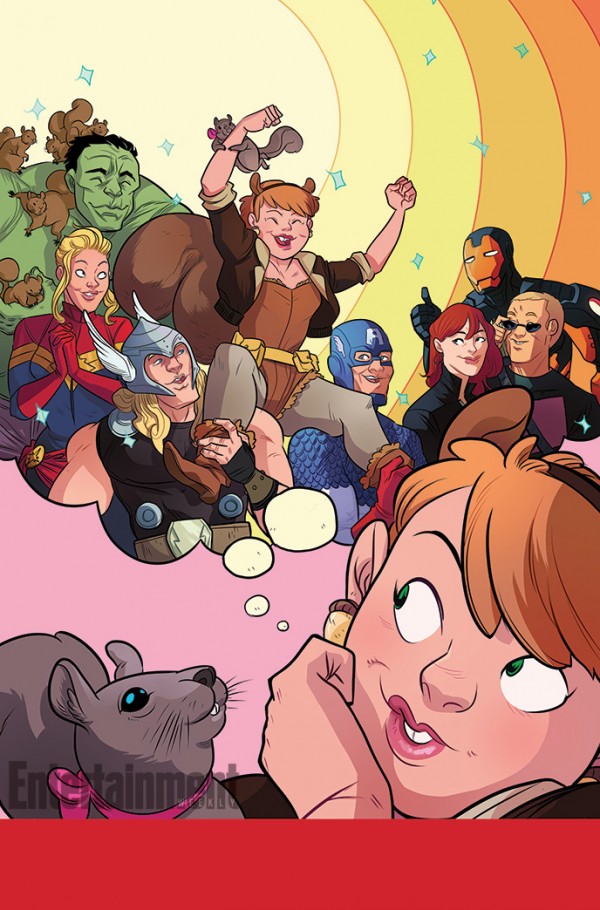 LOOK AT THAT ADORABLE COVER.

Well now we know what Marvel was doing with the Squirrel Girl trademark. Doreen Green is getting her very first solo title, and it’s not even a limited run, but an ongoing series from Ryan North and Erica Henderson. North’s name might be familiar to you from his long running webseries Dinosaur Comics, or his ongoing stint as the regular writer on the Adventure Time comic series for Boom! Studios. Henderson’s worked on Atomic Robo: Real Science Adventures, and Subatomic Party Girls, and variant covers for the like of Marceline and the Scream Queens.

But who the heck is Squirrel Girl, you ask, and why do I feel like I’ve heard of her before? Well, she’s a young mutant from the Marvel Universe, whose genetic code gives her a variety of abilities, such as enhanced agility and reflexes, short retractable claws, buck teeth capable of chewing through wood, and a four foot long, bushy, squirrel-like tail. And the ability to talk to and make friends with squirrels.

Entertainment Weekly says she’s best known for being the nanny of Danielle, Luke Cage and Jessica Jones kid, but we all know what Squirrel Girl is famous for: her ability to go toe to toe with the Marvel Universe’s biggest bruisers and titans and inexplicably come out on top. The legendary Steve Ditko plotted her first appearance, in which she takes down Doctor Doom in a fair fight. After that precedent was set, Doreen Green’s further occasional appearances were usually not-so-serious stories that featured her taking down the big bads of the Marvel Universe, from M.O.D.O.K. to Thanos, as well as some heavy hitting heroes like Deadpool and Wolverine.

Details are sparse on the series plot, except for this tidbit: “When the comic book begins, she’s starting college—but in no time at all, Squirrel Girl is defending Earth from threats most cosmic.” It’s great to see Marvel taking on another lady-led ongoing, and it’s a great add on to see that a female comics creator is also attached to the book. For all its new lady-led series, Storm, Thor, Black Widow, She-Hulk, and more, Marvel has been very slow to add any cover-credited women creators on the back end. Ryan North is a great fit for a character who’s always had a certain comedic focus, and just look at that cover from Erica Henderson! Seems like the book is in great hands.

You can see a variant cover and one of Henderson’s sketches of Squirrel Girl’s new look at Entertainment Weekly.