All hail, female Thor! Long may she reign … whoever she is. 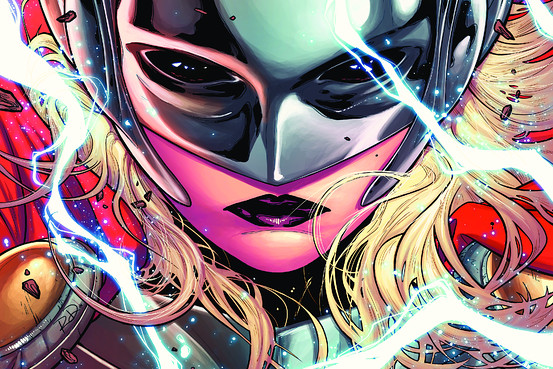 The much-anticipated Thor #1, with its introduction of female Thor, is here! A new era in the Thor mythos has begun, and it couldn’t be off to a better start.

Setting aside the new incarnation of Thor for a moment, Thor #1 is simply a very well written issue. It does a good job building upon the intrigue of previously established mysteries while still moving the story forward. Thor is now unworthy of Mjolnir, for example, and therefore unable to fly. So what does he do when Malekith attacks Roxxon Seabase? Rather than hold the plot hostage to his desolation, he rides a ram to the bottom of the Norwegian sea and tries to fight off Malekith with an axe, of course.

This issue also amasses more questions than it answers, but it expands upon these mysteries in a way that’s satisfying. We still don’t know what Nick Fury whispered to Thor to render him unworthy, but we do know that whatever happened has shifted the worthy-according-to-Odin paradigm to the point that now even Odin can’t lift the hammer. As a rule, I’m wary of serials that pile on several questions at a time (likely residual trauma from Lost) but Thor #1 makes it work, because a problem of this magnitude is genuine perplexing and worth (get it? Worth?) drawing out.

As for the highly publicized focal point of the issue, female Thor, well… there isn’t much to say about her just yet. In the last two pages, an unidentified woman grasps Mjolnir’s handle, the inscribed “he” in “whosoever holds this hammer, if he be worthy shall possess the power of Thor” amends itself to “she,” and the holder raises Mjolnir above her head as female Thor.

Now, it is heavily, heavily implied that it’s Freyja, so much so that I was prepared to outright declare her Thor in this review (I had this gif ready to go and everything). After all, when she and the newly returned Odin had a spat over who’s in charge of Asgardia and Odin effectively tells her to know her place, she casts a glance at Mjolnir that I took to unambiguously mean “it’s hammer time.” Then I read writer Jason Aaron’s interview with The Wall Street Journal in which he admits that the identity of female Thor is supposed to be unclear, that “that’ll be an ongoing mystery for a bit as to who she actually is… there’ll be multiple ‘suspects.’”

Personally, I had my money on Thor and Loki’s long-lost sister, Angela, and was somewhat disappointed when Original Sin #5.5 disproved that theory. But now that the possibility of Freyja being Thor has been introduced, I struggle to imagine a better option. Making female Thor an older woman and a mother would give the character even greater significance in the pantheon of superheroes. Furthermore, Freyja would be an interesting character to take on the mantle of Thor. She would have to adapt her regal air as former All-Mother to suit her new identity as a hammer-swinging superhero, and the less-than-benevolent terms on which she last saw Loki in Loki: Agent of Asgard #5 could make for some delightfully dysfunctional crossovers.

Regardless of female Thor’s identity, though, one thing I can unreservedly rave about is her costume. This is how you do it, comic book artists. With full leggings, a mostly covered abdomen and a breastplate that goes up to her chin, female Thor’s magnificent ensemble is conservative by superheroine standards, proving that a woman’s costume doesn’t have to be overtly sexual to be feminine, flattering and, above all else, badass.

No matter who female Thor turns out to be—Freyja, Angela, Sif, Ellisiv, Frigg, Atli (…Jane?)—just give me Thor #2 already!