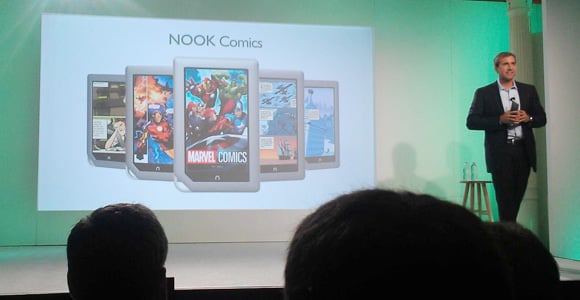 This morning, editorial director of Marvel.com, Ryan Penagos, live tweeted from Barnes & Noble’s NOOK event in New York City. Why was the Marvel employee in attendance? In addition to revealing their new Nook tablet, Barnes & Noble announced they would soon be carrying Marvel digital comics on the device in their first-ever electronic pairing with the bookseller.

The news adds to the interesting tale that’s been unfolding between the bookseller and the comic book world. Last month, Barnes & Noble decided to pull all DC Comics books from their physical store shelves after the publisher made an exclusive deal with Amazon.com for their new Kindle Fire e-reader. Jaime Carey, chief merchant of B&N, gave this statement at the time, “regardless of the publisher, we will not stock physical books in our stores if we are not offered the available digital format…To sell and promote the physical book in our store showrooms, and not have the eBook available for sale would undermine our promise to Barnes & Noble customers to make available any book, anywhere, anytime.”

DC later felt the need to clarify that their digital releases would not be exclusive to just one e-reader but available through the Kindle app on other devices besides the Fire. B&N then made an interesting move by inking a deal with UK publisher 2000 AD/Rebellion for a slew of old Alan Moore stories.

Penagos tweeted the news about Marvel comics coming to the NOOK and then continued filling his 1.3 million followers in about the new product and details about the deal. Here’s a breakdown:

The NOOK Tablet will cost $250 and be available next week online and in stores soon. B&N’s NOOK Color will now be $199 with new enhancements and also have Marvel comics. Penagos also gave us a look at the tablet up close via his tumblr, showing off Ultimate Spider-Man #1. 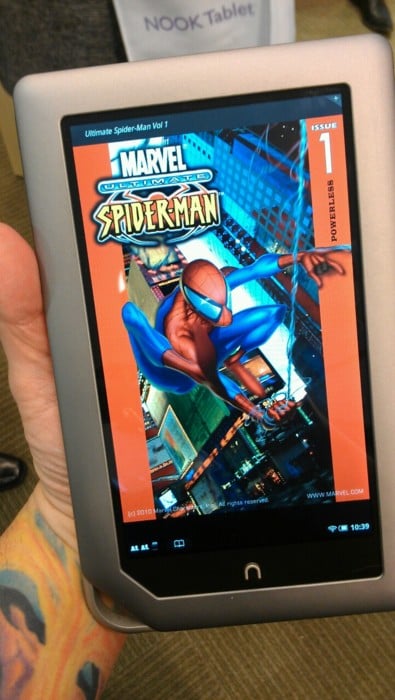 What do you make of the big news? If you were going to choose, which device would you purchase, the new NOOK or the Fire?