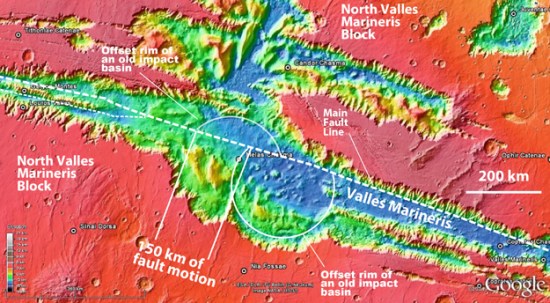 We’ve heard quite a bit about Mars this week, what with this whole Curiosity business and all. But today, we got some other news about the red planet that may even help us understand Earth a little better. An Yin, a professor at UCLA, recently discovered that Mars has tectonic plates similar to those that we have on Earth. Yin made this discovery when he observed that the sides of the 2,500-mile-long Martian canyon, Valles Marineris, had moved roughly 93 miles relative to each other. Make the jump to find out just how he did it and what it means for us on Earth.

An Yin is no stranger to plate tectonics. He has a PhD from the University of Southern California and has conducted geological research in the Tibetan Himalayas, where two of Earth’s seven major tectonic plates, the Eurasian and Indian plates, meet to form a massive mountain range. Yin was analyzing satellite images of Mars when he discovered that the two sides of Valles Marineris had moved horizontally much like how tectonic plates on Earth move at a fault line, but that wasn’t the only similarity. His research in the Himalayas allowed Yin to notice such similarities between the two sites as smooth canyon walls and linear volcanic zones. Yin found this discovery surprising. He told Mars Today:

“In the beginning, I did not expect plate tectonics, but the more I studied it, the more I realized Mars is so different from what other scientists anticipated. I saw that the idea that it is just a big crack that opened up is incorrect. It is really a plate boundary, with horizontal motion. That is kind of shocking, but the evidence is quite clear.

Mars is a much smaller planet than Earth, and has a very different tectonic structure. An Yin’s discovery points to the theory that Mars has only two crustal plates which move much more slowly than those on Earth. This discovery can help us learn more about the formation of our own planet’s tectonic plates and provide another example of the way plates move in relation to one another. We can use this research to look into Mars’ past by charting crust movement, and into its future by predicting changes associated with shifting plates.

And just in case you were wondering, yes, there are marsquakes on Mars. Yin estimates that, while extremely rare, the planet’s fault line can, in fact, trigger seismic activity.