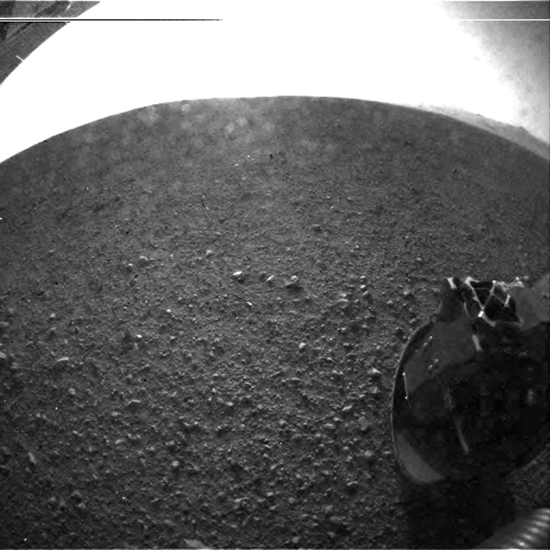 In the wee hours of the morning, NASA successfully landed the Curiosity rover on Mars. To rephrase, a one-ton moving laboratory completed that included a detachable heat shield, supersonic parachute, rocket boosters, completed maneuvers that led to a sky crane lowering it to the surface. Just for a moment, let that all sink in. Now that it has landed, images are starting to trickle back from the distant planet.

The website for the Mars Science Laboratory mission includes the following about the image pictured above:

This is one of the first images taken by NASA’s Curiosity rover, which landed on Mars the evening of Aug. 5 PDT (morning of Aug. 6 EDT). It was taken through a “fisheye” wide-angle lens on the left “eye” of a stereo pair of Hazard-Avoidance cameras on the left-rear side of the rover. The image is one-half of full resolution. The clear dust cover that protected the camera during landing has been sprung open. Part of the spring that released the dust cover can be seen at the bottom right, near the rover’s wheel.

On the top left, part of the rover’s power supply is visible.

Some dust appears on the lens even with the dust cover off.

The cameras are looking directly into the sun, so the top of the image is saturated. Looking straight into the sun does not harm the cameras. The lines across the top are an artifact called “blooming” that occurs in the camera’s detector because of the saturation.

As planned, the rover’s early engineering images are lower resolution. Larger color images from other cameras are expected later in the week when the rover’s mast, carrying high-resolution cameras, is deployed.

During the rover’s first two years, it will probe the Gale Crater region it landed in to see if Mars ever fostered “conditions favorable for microbial life.” With ten different science instruments, Curiosity measures twice the length as either Spirit or Opportunity and weighs five times as much. The scientific capabilities of the rover include being able to fire a laser from a distance to check out the composition of rocks, a drill to grab samples of rock interiors that can then be scooped and parceled out to different compartments for testing, and many others. 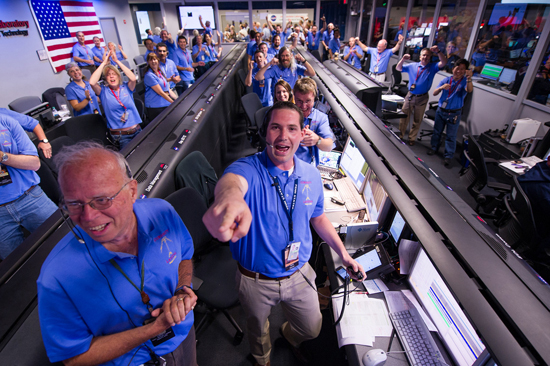 In a nutshell, everyone involved did an awesome thing and the world will benefit from it.