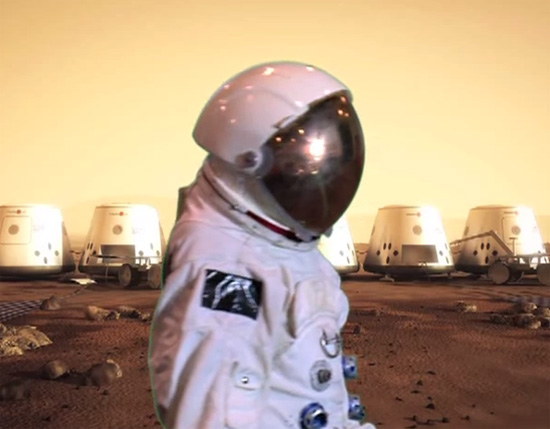 Tired of waiting for NASA to get your ass to Mars? Why not become a permanent resident of the red planet with the new one-way mission proposed by the Dutch company Mars One! Their bold plan is to build a “village” on Mars, skipping exploration and going straight in to settlement, 2023. That is, of course, assuming that this plan isn’t just a lot of hot air.

The Mars One mission is bold: It proposes landing a series of habitation units derived from SpaceX Dragon capsules on the red planet to be assembled by robotic rovers. Once complete, humans will launch from Earth in 2022 landing on Mars seven months later. Now residents of Mars, the explorers will live and work on the planet for the rest of their lives, with follow-up crews arriving every two years afterward.

The key to this whole scheme is, as founder Bas Lansdorp says, to turn the entire thing into an enormous “media event.” The company is a bit vague on what this means, but it sounds like the entire mission would be funded by corporations and broadcast live to the world like reality TV. All he needs is $6 billion.

For those of you playing along at home, this isn’t the first one-way Mars trip that’s been proposed. The equally insane, though more audaciously named, “Spirit of the Lone Eagle” was touted back in 2006. All of these plans solve one of the largest technical problems with a Mars mission — the return trip — by simply ignoring it. On paper, a one-way trip requires less material, fuel, and flying thus making it “easier.”

However, it replaces one problem with an even bigger one: Sustained living in a place that wants to kill you. I’d love to go into greater detail about how Mars One is planning on dealing with these issues, but I can’t because those details simply aren’t available. The company says they have letters of understanding (in writing, even!) from a number of technology companies, and broadly outline their plan on their site’s technology page. This might seem a bit shifty and it all came to a head during a disastrous Reddit AMA last week. Skeptical redditors tore the plan apart — particularly user elitezero whose highly nuanced and technical questions were completely ignored.

While a lot of people have taken that to mean that Mars One is a scam, I think it’s much simpler than that: The company isn’t going to do the planning themselves. Their goals are broad and untechnical because they’re going to contract other people to do all the hard work for them and have basically said as such.They’d probably take the role of systems integrators, pulling existing technologies into a single (marketable) mission. Their idea, that the Mars mission be a corporate funded media spectacle, is what they’re selling.

But they don’t even address this very well. What happens when no one wants to watch broadcasts from Mars because they are excruciatingly dull? What happens when corporations pull their sponsorship — do the Mars residents just die out because Tide didn’t want to pay the bills anymore? Who amongst the explorers is here to win, not to make friends? Will Snooki survive another sandstorm? Mars One may be pushing an idea, not technologies, but they haven’t managed to demonstrate that it’s a good idea.

A poorly green-screened video will not be enough.

That’s where the whole scheme falls apart, of course. We’re living in a time when these kind of audacious plans actually could be possible and that has raised the bar for the public’s expectations. Companies like SpaceX have shown that the private sector really can do space travel; however, they’ve always been careful to back up their claims with careful plans and results. For instance, the newly-minted asteroid mining company Planetary Resources took pains to lay out all the science behind their work. What’s more, their near-term plans are quite modest: Launching a space telescope to look for juicy space metals.

I wish Lansdrop the best in securing funding for his project, but until he gets some concrete details, I hope his rockets never leaves the ground. For my part, I’m putting my money on NASA and SpaceX as the architects of humanity’s interplanetary future.