NASA Kind of, Sort of, Maybe Found Life on Mars 36 Years Ago 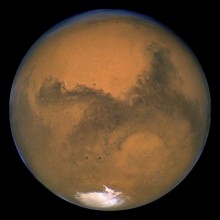 An international team of scientists and mathematicians have concluded that new analysis of data from 36 years ago shows that NASA found life on Mars. But don’t get too excited.

The analysis was the result of a life-detection study performed in 1976 by NASA’s Mars’ Viking robots. Researchers recently reanalyzed the data, and found that while the original experiment found evidence of geological activity rather than biological, the new analysis employs a different way of looking at the data, which in turn suggests that the same, seemingly void-of-life results might actually contain biological activity.

The new analysis compared the old Viking results with data from terrestrial biological activity, and found that those old Viking results were more similar to the terrestrial biological activity, rather than just physical activity. However, though the method is actually pretty simple (compare the old activity to activity that is proven to be biological), it is largely unproven to be effective. The road to proving the method is effective is to first prove that it can work between two Earth activities, rather than ones from Mars.

So, not the biggest news for finding life, but yet another tidbit of evidence that, when compiled with everything else found throughout the years, looks a little more like we aren’t (or weren’t) the only ones in this universe, much less our own galactic backyard.