That's great, but who's watching the rover right now? 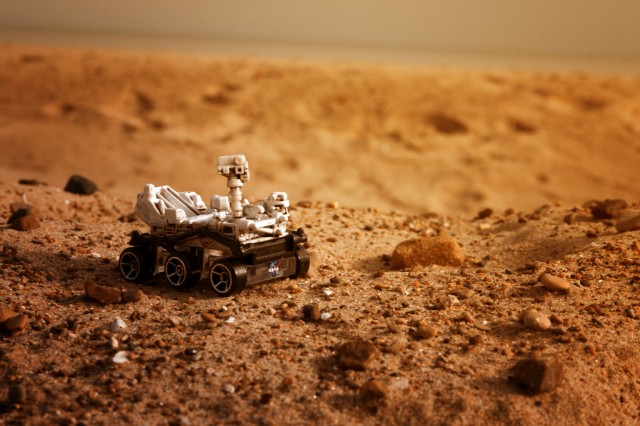 The Mars Curiosity Rover Mission Team took another break from navigating the surface of a foreign planet to preemptively celebrate their rover’s first Martian anniversary on August 5th/6th. So how do engineers and scientists celebrate? By answering a whole lot of questions about science and what they do for a living, of course.

Here’s what they all look like in their proof pic: 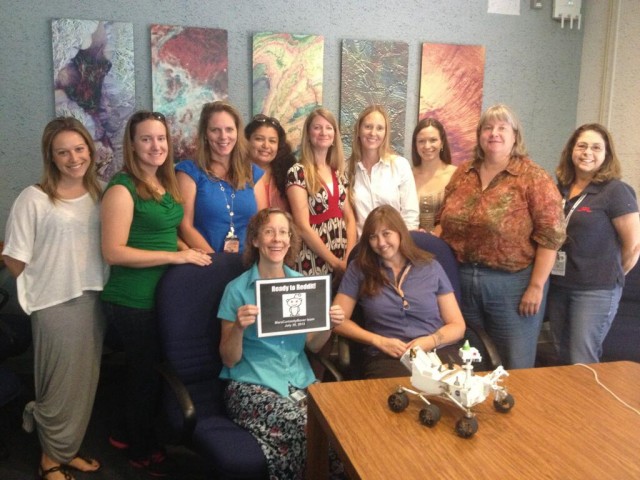 Naturally, these awesome people had a lot to say, so we’ve pulled some of our favorite questions and responses to give you the gist of what went down. If you’re hankering for more, you can always check out the rest of the AMA thread in its entirety.

Congratulations on a successful one year! So, what are the plans for the next year? What are you expecting to find?

Sarah Marcotte: Curiosity is driving toward the foothills of Mount Sharp, which will take months, almost a year. We will be examining interesting things along the way as we find them. Perhaps stopping to drill or scoop more. When we reach the foot of mount sharp we will be at the oldest rocks in Gale crater, which are the clay minerals and may have preserved signs of life if it ever arose on Mars.

What has been the most significant discovery so far?

Joy Crisp: The results from our first rock drilling told us that the past environment, when that mudstone rock formed, was suitable for life. The mudstone formed in an ancient river system or an intermittently wet lake bed that could have provided the chemical energy and other favorable conditions for microbial life, if life existed then. This ancient wet environment was not harshly oxidizing, acidic or extremely salty. All the necessary chemical building blocks were available.

When asked by Mikey-2-Guns to clarify why no hard evidence for life on Mars has yet been found, Crisp continued:

Curiosity isn’t equipped to detect life. The instruments were selected to meet the objective of characterizing environments and searching for habitable environments. It has been successful in doing that.

User aguycalledjack wanted to know more about what it’s like to be an employee at NASA:

What does the average day entail for an employee working on the Mars Curiosity Rover Mission? For example, what kind of jobs do you get up to, do you work long shifts or short shifts, do you have any interesting places at spend your time when you’re on your dinner/break?

Megan Richardson: I am on Curiosity mission operations. In the beginning of the mission my average day involved setting my alarm clock 40 min later each day so I could stay on Curiosity’s schedule.

Now, we are on more of a normal schedule. I come into mission ops each morning to take a look at all of the data as it comes down. I analyze the data to understand the health of the rover mechanisms. The team uses this information to plan the next days activities. When I’m done assessments for the day I typically work in the testbed with Curiosity’s twin testing new software updates.

Erisa Hine: For me, it depends on what deadlines are ahead. I’m helping with testing new software so it’s a combination of long days in the Mars Yard running tests on our test rover; or preparing presentations and documents to describe any changes we’d like to make, the new capabilities we’re adding, etc. We’re still testing on some weekends.

And then there was Spartyos, who opened up the obligatory discussion about space exploration funding:

To people who claim space exploration is a waste of time and money, what would you say to them to change their minds?

Sarah Marcotte: I would say that the space program spurs much technological advancement that benefits humankind. Miniaturization of electronics has been helpful for medical devices that can be implanted into bodies or for arthroscopic surgery, satellites in orbit that support your cell phone or weather forecasts are two easy spin-offs that help all of us. Also we can answer some fundamental questions about whether we are alone in the universe!

Joy Crisp: Fascinating results or pictures of beautiful scenery can provide a sense of excitement, awe, and wonder in the public, making them more interested in learning about “how things work” and could encourage more young people to be interested in science and engineering, causing some of them to change career paths. This is important because science and technological innovation are critical to our economic prosperity and national security. Results from space missions can provide positive news that makes us proud of what humankind has accomplished, and shows the world that we’re still interested in exploring new frontiers and learning more about how the Universe works. The Curiosity mission has contributions from 8 other countries (Spain, Russia, France, Canada, Germany, Finland, Mexico, Switzerland) and joint efforts like this can help bolster international cooperation.

Finally, stepwise_refinement asked the question that was really on everyone’s mind:

Who is the best at Kerbal Space Program in the office?

Veronica McGregor: We did a poll in the room and no one is using KSP. Too busy it seems doing the real deal!

Guess xkcd was right about that one after all.