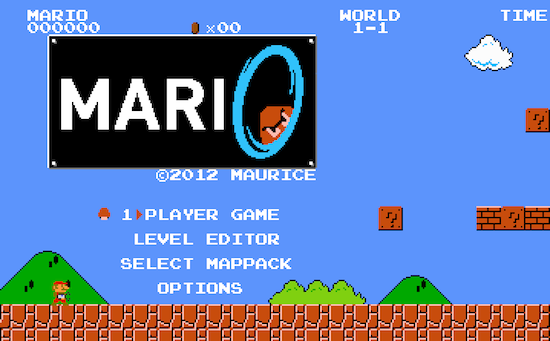 Nintendo’s venerable Super Mario Brothers has been a video game staple for nearly three decades, while Vavle’s Portal was a surprise hit from five years ago. Clearly, these two needed to get together and create a bizarre retro platform shooter with portals and physics. Fortunately, that’s just what the fine folks over at Stabyourself have done with Mari0, and you can download it for free right now.

In addition to all the platformer/puzzle fun, Mari0 supports up to 4 players in online multiplayer, comes with a level editor, hats, and a host of other extras. Here’s the complete list:

What are those “game modifiers?” Just delightful and bizarre extras like altering your screen so as it appears to be a crappy TV, bullet time, huge Mario, and the perhaps My Little Pony: Friendship is Magic inspired “Sonic Rainboom.” It’s just bizarre, anarchic fun.

There’s a quick view of what you’ll have in store in the teaser video below.