There's more to being a lady than using winking smiley faces, guys! 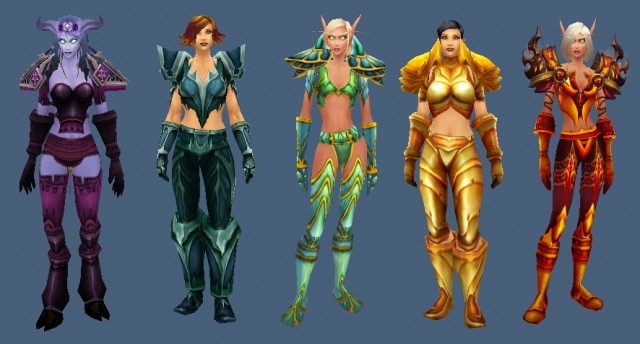 You can play literally any type of character you want in most MMORPGs. Feel like being a dwarf? Awesome. A shapeshifer? Go for it. So of course some curious players are going to wonder what it’s like to be a gender other than the one they identify as. But when male players try to roleplay female characters, they start acting kinda weird. Like, really weird.

Researchers at Concordia University, Colorado State University, Syracuse University, Hofstra University and the University of Toronto were interested in determining whether or not socially conditioned gender norms are present in the way that we play online games. To do this, they took gameplay footage from 375 players in World of Warcraft and studied the different behaviors that each gamer exhibited, including their movement, chats, and interactions with objects in the game world. Among these players, about 23% percent of male-identified characters chose female avatars, compared to 7% of female-identified players who did the opposite.

According to the researchers’ results, which were recently published in Information, Communication and Society, male players who play female characters behave very differently than female players playing female characters, most tellingly in the way that they move. For some weird reason, they tend to “move backwards more often” and are more likely to physically distance themselves from the rest of their party. They also use a lot more smiling emoticons, tend to select more conventionally attractive avatars (duh), and jump around a lot more than female players — 116 times more on average, as a matter of fact.

The research team thinks that this could be because many male players use female avatars so that other male players will be nicer to them (which is hilarious given the way that female players are treated in a lot of other multiplayer games), so jumping around is a way to hold their attention. Regardless, the effect is the same: men who are deliberately playing as women appear to adopt different strategies based on how they think women act, and those strategies appear to be nothing like what women do in the same circumstances.

“Our findings support feminist theories suggesting that although gender is a powerful social category, there is a range of ways it can be performed,” Concordia University professor Mia Consalvo said. “Men may not necessarily try to mask their offline gender when they use a female avatar, but our study shows they do reinforce idealized notions of feminine appearance and communication.”

Of course, the study isn’t a perfect smackdown of performative gender roles. The sample size is admittedly very small, and it’s hard to tell if they were able to take the behaviors of trans or non-binary players into account, or if such players were even sought out (see the edit below for more on this). But the idea that much of gender is dependent on tightly constructed social expectations? That’s something we can get behind.

And if you do see a female-avatar in World of Warcraft who’s jumping up and down and :)-ing at you a lot? Don’t question it too much or try to “out” the gender they identify with offline. It’s just a game, after all. Who cares what the person on the other end of the sexy elf ranger is like in real life?

EDIT 5/8/2014 12:37pm: It was pointed out to me on Twitter that my initial write-up messed some stuff up, so I want to sincerely apologize and make my own views a little clearer for the record. From what I can tell, I don’t think that the study did enough to move past the outdated idea of gender binarism, which is not good at all. However, I do think the conclusion that the study comes to — that gender expression is often very performative on a subconscious level — is definitely worth talking about. And, of course, the performative nature of gender doesn’t make it less valid, which is why we should all try not to be jerks to people based on how we think they should be identifying or acting. Online or off, that’s no way to be.