Facebook Did a Good Thing, Will Allow More Than Male/Female Gender Preferences to Users

I don't have a joke for this. I'm legitimately excited. 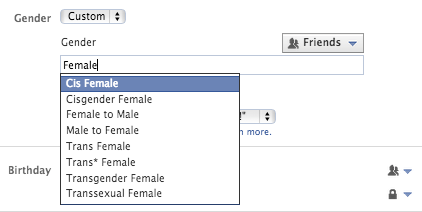 Obviously, you don’t need us to tell you that it’s hard on the Internet for trans and non-binary people, but it’s especially annoying when you sign up for a website and “gender” is one of the first things the registration page asks about. Luckily, Facebook’s taking a massive step forward by expanding the options available.

According to the Associated Press, not only is Facebook supplying a “custom” gender option that allows you to fill in one of 50 different labels, from trans to cis and everything in between. No, seriously, everything: it even accounts for the multiple different words and phrases that someone might choose to label themselves according to what’s popularly used in many online trans communities. So, if you prefer “gender fluid” and your friend prefers “gender nonconforming,” you’ll both be able to use your own label, because they’re totally both in there.

In addition, they’ll also be providing three different pronoun choices: he/him, she/her, and they/them. A certain breed of pedant will probably argue that the last option there isn’t “correct,” but “they” has actually gained a wide following as a viable neutral third person option for people who would find themselves somewhere between male and female — or for people who don’t know the gender of the person they’re talking about and don’t want to assume one or the other. So, you know, suck it up, babies.

As an added bonus, your pronouns have their own privacy setting. So, if you want to make it only available to close friends, you can do that, too. We’re not quite sure how it works yet, but it’s nice to see that Facebook is trying to attune to peoples’ safety concerns when it comes to gender.

The different gender labels aren’t 100% customizable, however, which is probably a good thing for now — you won’t get any jerks writing in “I’M A LIZARD THIS IS STUPID” or whatever. Either way, it’s a massive, massive step forward for the social media network, and a lot of GSRM advocates (that’s gender, sexual and/or romantic minorities) are very happy, as they’ve been petitioning for this change for years.

Of course, a lot of less-informed people will probably not be cool with this — I mean, heck, people can’t even keep people from saying terrible things about adorable interracial Cheerios ads. But like the elusive honey badger, Facebook don’t give a fuck.

“Really, there was no debate within Facebook about the social implications at all,” director of growth Alex Shultz told AP. “It was simple: Not allowing people to express something so fundamental is not really cool so we did something.” Sure, it took them a couple of years after numerous petitions and Facebook pages about gender, but hey, it’s a start. A really good start for a lot of people, as a matter of fact.

(via LGBTQ Nation and The Mary Sue, images via Facebook)