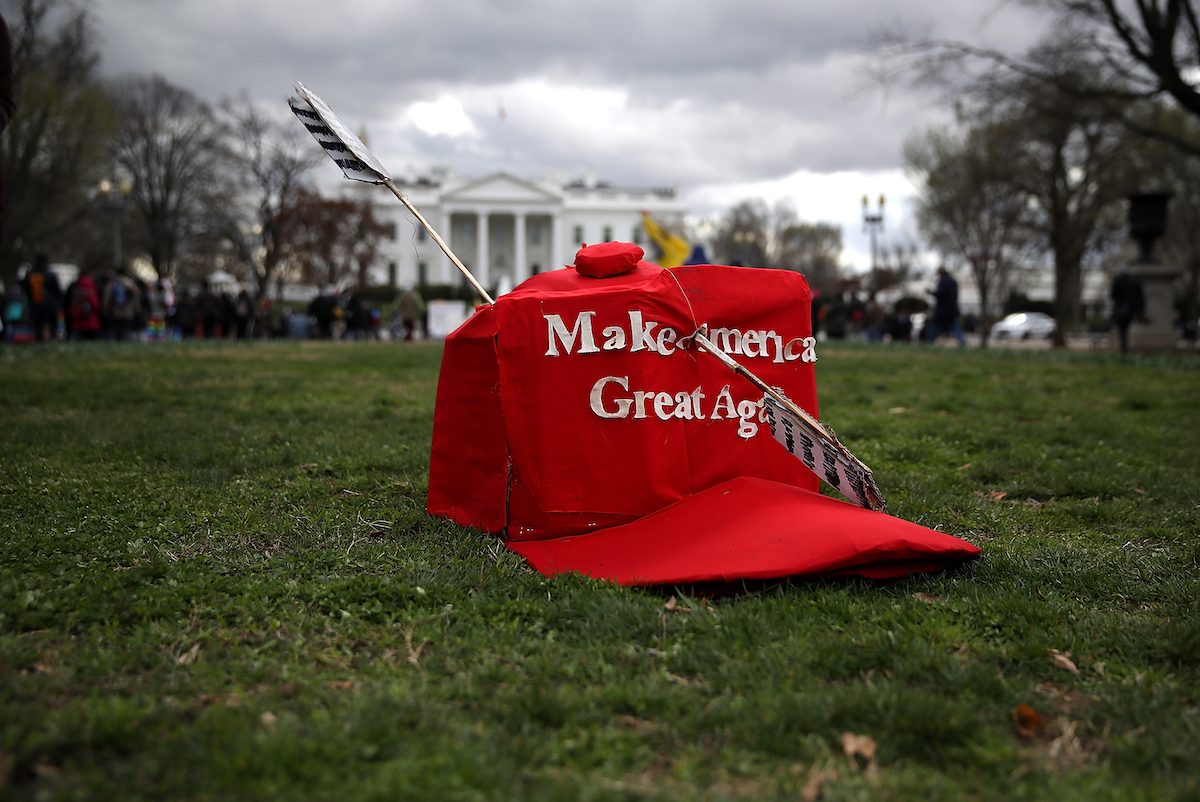 Nicholas Sandmann, the kid whose smirking face went viral last month when he and his Kentucky Catholic school friends appeared to surround an Omaha tribe elder during the March for Life protest in Washington D.C., is suing the Washington Post over coverage of that incident.

Video of the encounter showed Sandmann standing uncomfortably and apparently threateningly close the man, Nathan Phillips, smirking in his face while Phillips beat a drum. Sandmann’s friends, many of whom were, like Sandmann, wearing Make America Great Again hats, stood in the background appearing to harass and mock Phillips–shouting, laughing, and clapping aggressively.

When a longer video was released, people appeared to see two different things. The Covington kids were in a heated confrontation with several black protestors who identified themselves as Hebrew Israelites when Phillips approached. To many, it seemed clear that he was trying to diffuse the situation. He later said that the song he was playing on his drum was part of a ceremony to send spirits home and that his playing was “a supplication to God.” He also said that Sandmann “blocked my way and wouldn’t allow me to retreat.”

Others watched the video and saw Phillips as an aggressor, joining in the confrontation of children. They saw Sandmann’s expression as being one of nervousness, not arrogance. And a whole lot of media time was devoted to letting this kid make that argument.

Gonna give y’all some media/PR game:

– They filmed him from above to make him look smaller.

– His clothes are a little big.

– The lighting makes his face look like Shirley Temple.

Malcolm said the media will make you hate the oppressed and love the oppressor. Peep game. https://t.co/BBynd47W6x

Now, Sandmann is suing the Washington Post for $250 million over their initial coverage. The suit claims that “the Post engaged in a modern-day form of McCarthyism by competing with CNN and NBC, among others, to claim leadership of a mainstream and social media mob of bullies which attacked, vilified, and threatened Nicholas Sandmann (‘Nicholas’), an innocent secondary school child.”

“The Post wrongfully targeted and bullied Nicholas because he was the white, Catholic student wearing a red ‘Make America Great Again’ souvenir cap,” it reads. “The Post bullied an innocent child with an absolute disregard for the pain and destruction its attacks would cause to his life.”

The lawsuit repeatedly refers to Sandmann’s MAGA hat as a “souvenir” and insists that he “has zero history of political activism or aggressiveness.” They say this, despite the fact that he and his classmates were in D.C. for a political event–at which, they reportedly acted pretty aggressively.

The Covington Catholic boys harrassed my friends and I before the incident with Nathan Phillips even happened. I’m tired of reading things saying they were provoked by anyone else other than their own egos and ignorance 🤦🏼‍♀️ pic.twitter.com/utdPFii92D

While their faces aren’t really visible, the woman in the video said she was “positive” they were the same boys.

But Sandmann’s lawyers are working hard to depict him as an innocent child. They refer to him throughout by his first name (while calling Phillips by his last). They insist he can’t possibly have any established political beliefs–again, despite wearing a MAGA hat at an anti-choice protest. Sandmann, they say, is just an innocent casualty in the Post’s quest to “advance its well-known and easily documented, biased agenda against President Donald J. Trump.”

And wouldn’t you guess, Trump is all over those accusations.

This isn’t the first time he’s spoken out in support of Sandmann. Last month, he held the teen up as a symbol of “fake news,” quite possibly planting the idea of a lawsuit in the first place.

Nick Sandmann and the students of Covington have become symbols of Fake News and how evil it can be. They have captivated the attention of the world, and I know they will use it for the good – maybe even to bring people together. It started off unpleasant, but can end in a dream!

But this morning, he went on a “fake news” mini-tirade.

The Press has never been more dishonest than it is today. Stories are written that have absolutely no basis in fact. The writers don’t even call asking for verification. They are totally out of control. Sadly, I kept many of them in business. In six years, they all go BUST!

The New York Times reporting is false. They are a true ENEMY OF THE PEOPLE!

Trump has repeatedly (22 times on Twitter) called the “fake news media” the “enemy of the people,” but this appears to be the first time he’s directly applied that title to a specific outlet. It’s a move that many see as furthering Trump’s endangerment of journalists.

As Trump, for what may be the first time, labels an individual news organization “the enemy of the people,” remember that explosive devices were mailed last year to another news organization that Trump regularly attacks online and in speeches.

As I’ve reported, there is widespread evidence that Trump’s attacks on the media are provoking violent threats against journalists. During his presidency, reporters have faced assaults, mass shootings, and pipe bombs in the mail. But he just won’t stop 👉🏻 https://t.co/NsgNLNzqjj https://t.co/ymOWEK3RXp

Lately I’ve started getting direct messages calling me an “enemy of the people.” Trump is putting this nonsense into the jetstream, and his less sophisticated followers are beginning to hate in the way he hates and use rhetoric in the way he uses rhetoric, if they didn’t already. https://t.co/bRww9ddGVQ

they happily cheer on an authoritarian President & defend the destruction of American Democracy. ⬇️ pic.twitter.com/Qy0l01OOj5