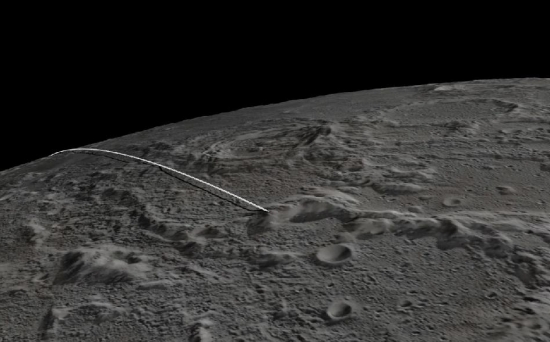 The twin probes that gave us that detailed map of the Moon’s gravity have precious few hours left to live. Tomorrow at approximately 5:28pm (EST) the two Gravity Recovery and Interior Laboratory (GRAIL) lunar probes known as Ebb and Flow will crash into the side of a mountain near the Moon’s north pole. NASA scientists will be livestreaming and carefully monitoring the event, presumably so they can make sure the impact near the lunar north pole doesn’t hurt Moon Santa.

The GRAIL mission is coming to an end because the two spacecraft don’t have enough fuel to continue orbiting the Moon. Tomorrow’s impact will mark the end of a successful and useful mission. Ebb and Flow have helped NASA gain a better understanding of the Moon’s composition and internal structure since they were launched in September of last year.

NASA’s coverage of the end of the GRAIL probes will be available on their website and will begin at 5:00pm (EST). NASA scientists and engineers from the Jet Propulsion Laboratory (JPL) will provide commentary for the event. Unfortunately, the site of Ebb and Flow’s final resting place is on the dark side of the moon, so we won’t be able to see any live video of the actual impact.

When Curiosity successfully landed on the surface of Mars, anyone watching NASA’s livestream saw some incredibly excited engineers and scientists celebrating a major accomplishment. NASA folks can feel very passionate about their work, so it might stand to reason that tomorrow could be an emotional day for the GRAIL team. If you know any of them, maybe give them a hug from us.