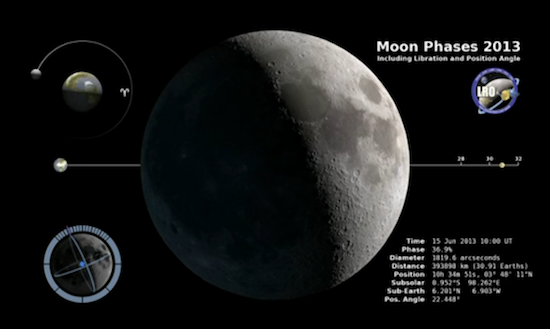 The Scientific Visualization Studio at NASA has released a new animation of the Moon going through its phases for the year 2013. New data from the Lunar Reconnaissance Orbiter has made it possible to render the simulation with a new level of detail, and the result is just gorgeous. NASA set the video to Rossini’s “String Sonata No. 3 in C Major,” but we’ve found syncing it up to Dark Side of the Moon works nicely, too.

The added detail for this simulation was due to new topographic measurements taken with the Lunar Orbiter Laser Altimeter. The new data allowed the author of the video, Ernie Wright, to render shadows with more accuracy and clarity than any previous Moon simulations. As Wright himself put it, “I use those maps to make the Moon sphere bumpy in all the right places.”

The release on NASA’s site claims that Wright produced the video in the same software that Hollywood uses for rendering things like 3D animations and effects, but it wasn’t specific about which one. Whatever software he used, he used it well, as this is really amazing to look at. It allowed him to render the Moon and alter the position of the camera and light source. In this case, the camera was the Earth, and the light source was the Sun.

To get the lighting accurate, Wright calculated where the Earth would be and the relative direction of the Sun at every hour of 2013. Placing the virtual camera from the perspective of Earth, Wright was able to match the angle of the light from the Sun accordingly. He wrote a program that made one frame of the animation for every hour of the year. The Moon doesn’t move in the video, the light and camera move around it, leaving it floating beautifully in the center of the frame.

One thing the Moon does do in the video is twist, seemingly, from left to right. Usually this movement is imperceptible because it happens so slowly, but when the motion of a year is compressed into a little more than five minutes we can see the Moon do this dance, which is called libration.

The video is oriented for a Northern Hemisphere view, but if you want to see what it would look from the Southern Hemisphere you can just rotate it 180 degrees, or watch it standing on your head. All the added blood flow to the brain might make this even more mesmerizing.