Hold Everything: Saturn Has Another Pac-Man Moon 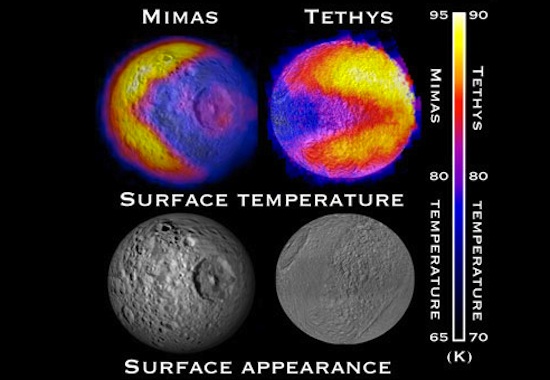 In 2010, which is about three millennia ago on the Internet, NASA’s Cassini Probe found perhaps the most important and relevant scientific discovery in the history of humanity: The heat signature of one of Saturn’s moons, Mimas, looked just like Pac-Man. Today, we can all pay attention to what is clearly the most important things that will be said today, which is that another moon of Saturn, Tethys, has a similar heat signature. There’s no word yet on whether this moon is a Ms. Pac-Man moon or not, but obviously we’ll stay with this one all night if we have to.

Disappointingly, the image was not hewn into the face of Tethys by laser-wielding aliens intent on paying homage to the hungry, yellow video game icon. Indeed, the Pac-Man shape is not on the surface at all, and is only visible in thermal images that read the heat signature of the satellite.

Researchers speculate that the odd heat signatures on Saturn’s moons are a result of the charged particles that are constantly bombarding the faces of the celestial bodies, transforming the way that their ice-covered surfaces hold and distribute heat and resulting in the unusual readings. Now that they’ve found two moons in Saturn’s system alone that demonstrate the feature, though, researchers are beginning to wonder if Pac-Man shaped heat signatures are that unusual after all.

Some members of the team think that the shapes could be more common than once thought, chomping their way through our own solar system, constantly of the run from comets like Inky, Blinky, Pinky, and Clyde. Carly Howlett, who authored a paper on the phenomenon that appeared in the journal Icarus, said:

Finding a second Pac-Man in the Saturn system tells us that the processes creating these Pac-Men are more widespread than previously thought…The Saturn system – and even the Jupiter system – could turn out to be a veritable arcade of these characters.