"They pull a mushroom, you pull a Fire Flower! That's the Chicago way!" 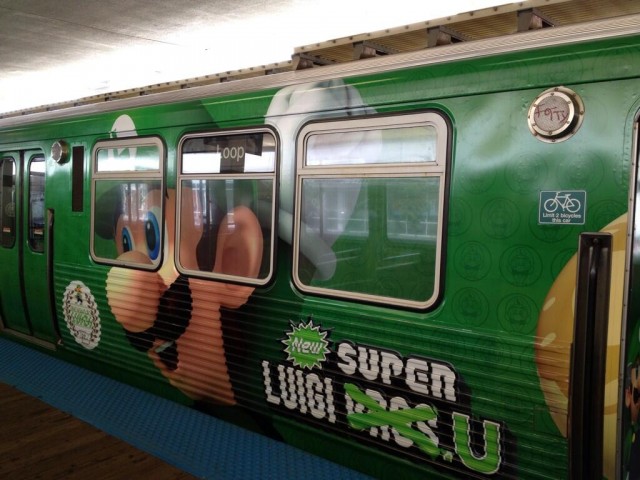 Mario might have pioneered the platformer game genre, but today his brother Luigi’s on a different platform: he’s riding a special train on Chicago’s Brown Line. Nintendo is promoting New Super Luigi U and the “Year of Luigi” with a specially decorated green train, a decked-out station, and appearances from the character himself.

In cooperation with the Chicago Transit Authority, Nintendo put on a Luigi Day celebration for some riders on the “L”. Luigi also took over Nintendo of America’s Twitter to talk about his experiences, and encouraged others to do the same using the hashtag #LuigiAndMe.

Riding the “L” is fun! Chicago is my kind of town. #LuigiAndMe pic.twitter.com/PxxarEa1nE

An elevated train  on the Brown Line (#424, running from 6 a.m. to 7 p.m.) was painted green, renamed the Luigi Line, and bedecked with Luigi marketing, which evidently made the Luigi mascot riding it very happy. We’re not sure how he can Tweet with those huge gloves, though. In addition, commuters at the Clark/Lake station at 124 W. Lake St. can play New Super Luigi U themselves at WiiU kiosks.

Just stepped off the “L” train at the Clark and Lake station and hit my head! Ow! Classic Luigi! #LuigiAndMe pic.twitter.com/2hBWiLXhLA

Come play New Super Luigi U all day at the Clark/Lake station on the “L” (for Luigi). pic.twitter.com/rv2YZbHjBc

We’re wondering if the choice of Chicago in particular for this event is making some kind of statement. Are they saying Chicago is the Luigi of American cities compared to New York? Or maybe Nintendo didn’t want to go anywhere near Brooklyn after the disaster that was the Super Mario Bros. movie. <shudders>

(via Polygon, main image by Nintendo of American via Twitter)