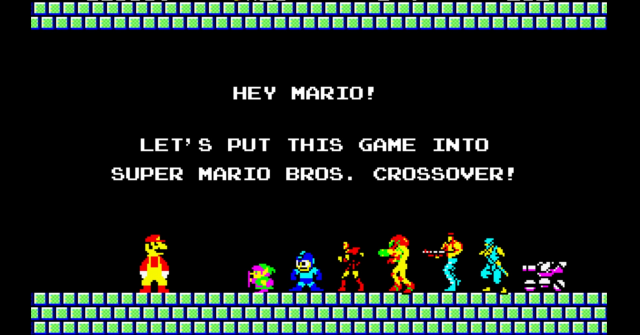 Jay Pavlina’s Super Mario Bros. Crossover — a remake of the original Mario where you can play as any of your favorite NES characters — garnered a lot of positive buzz when it released. Slowly but surely, it’s been given new updates with character costumes, level upscales, and more. Now, the third major update is upon us, and it adds a whole game’s worth of content.

This update is so significant because it adds all the levels from Super Mario Bros. Special, an obscure Japan-only PC game that was painfully slow but featured some new enemies and power-ups. So this gives us Westerners an opportunity to experience the game without all the technical issues of its original release. Not to mention that you can play through them with Link and Mega Man. So between the Special levels, the original SMB ones, and new difficulty-adjusted levels, SMBC‘s now packing a whopping 192 stages. Pretty impressive for a fan game, no?

If this has made you tired of listening to me and just want to skip right to the game, then do so here. While you’re at it, Pavlina is looking to get his own original game funded that he and his team have been working really hard on. It’s called Super Retro Squad, and it’s kind of like Crossover, but has a more of an SNES style of visuals and gameplay, and 4-player online multiplayer to boot.