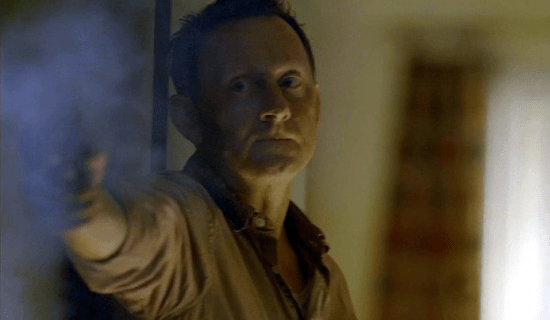 What follows is a recap of LOST Season 6, Episode 16: “What They Died For.” Lots of spoilers ensue.

Well, my fellow LOST fans, we’ve arrived at the final destination. With the conclusion of last night’s episode there is only two and a half hours of LOST left to be viewed. It’s hard to believe that after six seasons of mysteries, cliff hangers, love quadrangles, and next-morning-water-cooler-chatter it’s all about to end. But let’s dry our tears and enjoy a recap of the penultimate episode of LOST.

Last night’s episode, “What They Died For,” brought LOST fans the last few reluctant steps to the edge of the LOST cliff. It was an action packed episode, so let’s jump right into the off-island action.

This episode of LOST began as so many in the past have, with a close up of Jack’s eye. He’s in bed, in his apartment in LA. When he gets up and looks in the mirror he sees that his neck (which began bleeding in Episode 1 of this season) is bleeding worse than before. David, who made breakfast by opening a box of Super Bran, asks his dad if he’ll be at the concert that night. Jack says yes and learns that David’s mom will also be there. Could they be bothered to say her name? No, so she’s still a mystery. Claire, who is staying with her newly-found brother Jack, also joins them for breakfast. Jack’s cell phone rings and its Desmond pretending to be an employee of Oceanic Airlines, telling Jack that his lost cargo (his dead father) has been found.

Desmond is sitting in his car, getting ready to run John Locke over again, when he’s put under “citizen’s arrest” by Dr. Ben Linus. Desmond beats Ben to a bloody pulp as he has done so many times before. As he bleeds, Ben has a flash of Desmond beating him at the docks in Season 5, Episode 12. Desmond tells Ben that he’s not trying to hurt Mr. Locke but he’s trying to help him let go.

Ben makes it to the nurse’s office and takes a look at himself in the mirror. Mr. Locke wheels in and Ben relays the story of his meeting with Desmond and tells John that he saw something and that he believes Desmond was not trying to hurt John Locke.

Desmond walks into the police station and turns himself into Det. James Ford, who throws him in jail with Sayid and Kate. Det. Miles Straum asks Sawyer to come with him to a benefit concert for his dad’s (Dr. Pierre Chang’s) museum. Sawyer declines, since Charlotte will be there.

Back at Dr. Linus’s school, he meets Alex in the parking lot. She insists that he comes home with her and her mother (the one and only Danielle Rousseau, who looks great all cleaned up). The three eat dinner and Danielle tells Ben that he’s the closest thing Alex has ever had to a father. Ben tears up, it’s a touching moment.

John Locke meets Dr. Jack Shephard in his office at the hospital. John tells Jack about all of the strange happening that brought them together (the Oceanic flight, meeting in the Oceanic office, Jack operating on Locke). He says that he thinks there may be a reason they’ve been brought together. Jack says to Locke that he’s mistaking fate for coincidence. This line has appeared in many LOST episodes, between these two characters before.

Desmond, Kate, and Sayid are in process of being transported to the county jail when Desmond tells them that he’s going to bust them out, as long as Sayid and Kate agree to help Desmond with something afterwards. Of course they agree, and the police bus pulls over. The door opens and who do we see but everyone’s least favorite LA cop, Anna Lucia! Hurley rides in, gives Anna Lucia an envelope full of money, and takes Sayid with him. Desmond leaves with Kate, telling her that they have a concert to attend.

So, it appears to me, that we’re getting ready for a big rendezvous at the museum benefit concert. We know that Desmond, Kate, Jack, Charlotte, Daniel “Faraday” Widmore, and Miles are going to be there for sure. Hurley is a donor to that museum, so I’d assume that he’ll show up with Sayid. Hopefully Miles can convince Sawyer to come. But we still need John Locke, so let’s hope Helen is a philanthropist who will drag John along with her to the benefit.

On the island, Jack stitches up Kate’s shoulder, much like she stitched up his side in the pilot episode. Sawyer, Hurley, Jack, and Kate take off to the jungle to find Desmond. Sawyer feels pretty guilty about the death of Sun, Jin, and Sayid and tells the group that he killed them. Young Jacob appears to Hurley, and grabs the bag of Jacob’s ashes. Hurley chases him through the jungle and meets up with Older Jacob, who has started a fire. He tells Hurley that once the fire burns out, he will be gone forever.

Jacob appears to Kate, Sawyer, Hurley, and Jack and tells them what Sun, Jin, and Sayid died for. He explains that he made a mistake in creating the smoke monster years ago. He knew that the monster would find a way to kill him and that everyone was brought to the island as replacements for him. Jacob says that he brought them to the island because they were all broken, looking for something they couldn’t find, and that they needed the island as much as the island needed them. Kate asks why her name was crossed off the list, and Jacob replies that it was because she became a mother, but if she wants the job she can have it. Jack steps up like we all knew he would and says he will do the job.

Back in New Otherton, we meet up with Ben, Miles, and Richard who are looking for C4 to blow up the plane. They find some in Ben’s secret room in his old house. They hear noise outside the room and when they go to investigate, they find Zoe and Charles Widmore. Widmore tells them that he’s there to kills Flocke and he’s brought Desmond back to the island. Zoe goes outside and radios back to the house that Flocke has arrived in New Otherton.

Miles runs away, Widmore and Zoe hide in a closet, and Ben and Richard go outside to meet Flocke. Flocke appears as Smokey and pummels Richard to the point where he may actually be dead. Flocke then appears and tells Ben that he’s got some killing for him to do. Ben shows Flocke to the closet where Widmore and Zoe are hiding. Zoe speaks and Flocke knifes Zoe in the throat. He tells Widmore that if he doesn’t tell him why he is on the island that he will kill Widmore’s daughter, Penny. Widmore leans in to tell Flocke why he’s there and Ben shoots Widmore saying, “He doesn’t get to save his daughter”. Ben then tells Flocke that he’s ready to do some more killing. Creepy.

Ben and Flocke make their way to the well where Desmond’s dead body should be. His body is not there, and the rope down the well leads Flocke to believe that someone has helped Desmond out. Flocke tells Ben that Desmond was Widmore’s ‘fail safe’ and that Desmond was there to ensure that Flocke did not leave the island, even if the candidates did all die. The episode ends when Flocke tells Ben that he will get Desmond to do the one thing he never could, “destroy the island”.

So there we have it, the penultimate episode of LOST, setting fans up for the big finale. Don’t forget that the series ends on Sunday May 23rd. Be there to see how they tie up the loose ends!