Tom Hiddleston fans are some of the most seriously devoted fans I’ve ever seen. They’re now taking their love a step further but signing a petition asking Marvel to give him a Loki film all his own.

So, what are they asking for exactly?

“We respectfully yet strongly request Marvel put into action a full-length feature film production based on the Marvel character Loki portrayed by Tom Hiddleston,” writes the Free Loki petition. “We feel Loki (as portrayed by Tom Hiddleston), due to the astounding following both the character and actor have earned as a result of the Marvel films, more than warrants further exploration of his story. We believe such an endeavor would not only be profitable and successful but provide a larger view for general audiences of the incredibly complex and diverse personality a well-known villain of the Marvel universe is gifted with. To explore this darker side of the Thor storyline would be to give credit to a compelling individual, his remarkable portrayer and an appreciative audience that feels a fierce loyalty to both in an unprecedented way.”

As of writing, the petition has just over 19,000 signatures but I’m gonna go ahead and say the odds on this one are slim. Marvel Entertainment has a busy slate as it is and spinning off a Thor villain probably isn’t high on their list of priorities, no matter how aware they are of the fan-love. But one fan asked the man himself for thoughts on the petition just this afternoon. 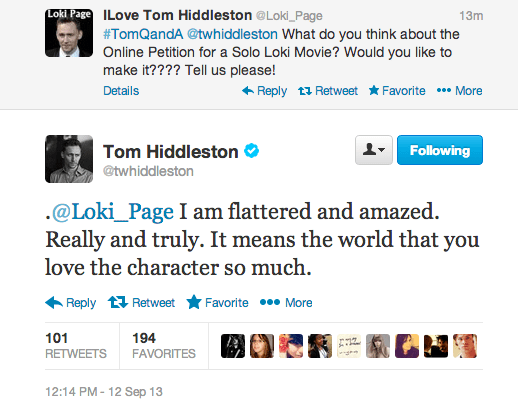 The actor went on to tweet, “@ThorMovies is, definitively, the only one on the slate for now. But… never say never.”

We already know Hiddleston won’t be appearing in The Avengers: Age of Ultron (although they filmed more with him for Thor: The Dark World) but then, we won’t underestimate his ability to get fans riled up. I think Marvel would do well to consider some Loki shorts ala Peggy Carter for their upcoming dvd releases.