If only all television show titles were this informative. 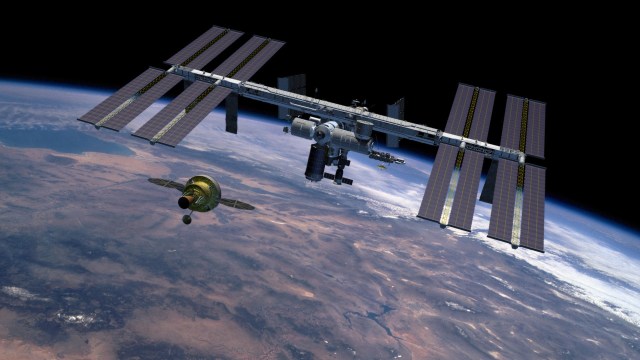 Right now, there are highly-trained astronauts whizzing around 240 miles above us eating freeze-dried food out of packets and just being cooler than us. Tonight on the Nat Geo Channel, we’ll be able to see just how much cooler they are first-hand with their unprecedented two-hour Live from Space special.

First let’s take a look at the trailer:

The show airs tonight at 8pm EDT, 5pm PDT. Soledad O’Brien and astronaut  Mike Massimino will host from NASA’s Johnson Space Center in Houston, while Rick Mastracchio and Koichi Wakata — who’s currently the commander of the ISS, by the way — will regale us with tales of life beyond our atmosphere. (Mikhail Tyurin, who’s also on board, will presumably be stuck doing all the important science work in the meantime.)

But what happens if the signal between the ISS and the Earth cuts out? Never fear, the producers have thought of that — and they kind of had to, because the signal from the ISS actually goes dark about every twenty to thirty minutes due to changes in satellite locations. To ensure that there’s no awkward down time over the course of the 2 hour television event, National Geographic has also produced a number of smaller taped segments about life in the ISS, such as the video below:

There are enough of these pretaped videos to last the entire Live From Space program just in case. However, that’s just a precaution: the ISS regularly streams to NASA’s public livestream channel, so they’ve got a handle on how to send live signals down from space.

For those of us who can’t bear to be away from a computer for more than three seconds while we’re watching television, there’s also a fantastic “second screen” experience at the Live From Space website. Currently you can use it to track the exact location of the ISS — at the time of writing, it’s somewhere over Brazil):

You can also use the hashtag #LiveFromSpace on Twitter during the program to ask the astronauts questions about what space is like, and they might just answer you live on the air. Isn’t the Internet great?

Have a question for an @NASA astronaut? Here’s your chance to ask them, and see it answered live on air! Use #LiveFromSpace

It’s going to be a fantastic window into the world of the International Space Station, and one that’s the result of months upon months of communication between NASA and National Geographic. I’m excited to see just how their efforts pay off tonight, and you should be, too.