In addition to being vast and incalculable, the universe is also really pretty. 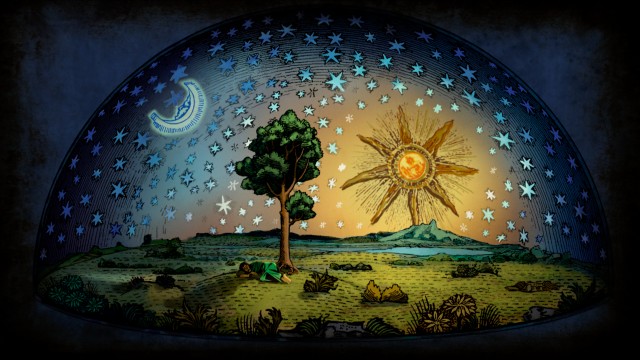 If you happen to watch Cosmos: A Spacetime Odyssey on Sunday night at 9pm—and you should, because it’s incredible—then you’re going to notice a lot of really gorgeously animated sequences over the course of the series. We wanted to know what went into making these parts of the show, so we went straight to the source.

Kara Vallow might not be a name you’re very familiar with, and that’s okay; she tends to stay behind the scenes on the production side of animation. Her resume, however, is pretty stacked: she’s worked on Dilbert, Teenage Mutant Ninja Turtles, Johnny Bravo and Drawn Together, as well as the Jessica Yu documentary, In The Realms of the Unreal, about the life and work of painter Henry Darger. Of cours, she’s probably best known for her work with Seth MacFarlane, which includes Family Guy, American Dad, and The Cleveland Show. She was kind enough to speak to us this week about her involvement with Cosmos: A SpaceTime Odyssey, and what went into creating such a distinct, integral part of the series.

I also got the chance to speak with Ann Druyen last week as part of Nat Geo’s Space Camp experience, and she said that the animation sequences were something Seth [MacFarlane] was really interested in doing from the get-go.

What was that process like from your point of view? When did you first get involved?

The narrative portions of the original Carl Sagan series were done in live action; they were sort of like historical recreations of different time periods. Seth thought that was going to be prohibitive in this incarnation of the series, because viewers are much more sophisticated now than they were then in terms of historical time periods being recreated by Hollywood. We’re attuned to seeing big budget period movies and costumes and stuff, and in the original series they were done very low budget. I don’t think they thought that viewers were going to accept that now, and they didn’t have the time to do a big budget Gosford Park type imagining of the narrative. So, it was Seth’s idea to do those in animation.

I was not involved in the show at all at that point. Seth approached me about a year and a half ago about creating those animation portions. I initially turned him down, because I honestly didn’t think I could do the material justice—the pure scope and ambition of Cosmos and the impact that the original series had on so many people was intimidating to me. But I met with Ann and her partner Mitchell, and talking to them really changed my mind. They sort of charmed me into it! Especially talking with Ann about how she imagined the show and her trepidation about using animation, because it’s nothing that she was familiar with. The animation process can be very intimidating to people who aren’t used to working in the medium. It’s a huge leap of faith, and you have to put a lot of trust in the hands of the animators that are going to realize your vision without being able to draw it yourself. 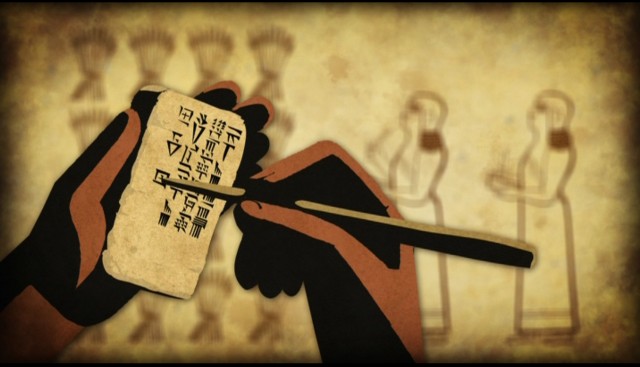 That actually makes for a great segue—I’m really curious to know how you came up with the overall aesthetic of these sequences. The Giordano Bruno segment in the first episode is so surreal and compelling.

When I first talked to Seth about what he was imagining, he threw a few key words at me: “adult” and “sophisticated” and “noire.” And then he sort of left me on my own to figure it out, which was a little intimidating. I’ve been working on television and animation for so long and it involved thinking outside of that arena completely. I hadn’t really done that in a while!

So I went to a lot of independent and non-American animated films. I hadn’t really seen any non-commercial cartoons in a long time and felt out of the loop! But I saw a lot of really interesting stuff that really inspired me to start thinking about different modes and styles of animation. The Secret of Kells was a big one—flat and sort of primitive but stylistically really distinct, like a painted mural. Another one was called The Invention of Love, a short by this art student. It had this really beautiful romantic story told all in silhouettes. I showed stills from some of these films to the producers and they loved a lot of them, and we sort of went from there.

I also wanted to produce the animation in a small, very contained way, because the scope of the entire show is so huge with all of its visual effects and location shots. We decided to do it all digital in After Effects and worked with a team of four people to develop a style of animation that was sophisticated and “adult” but uncomplicated. The narrative needed to be advanced, with all these profound scientific concepts that needed to be presented clearly with an authored vision. And some of these episodes have quite a bit of animation, so we really wanted it to be stylistic and vibrant, like pieces of artwork that tell a rich story. It’s a part of the show that’s more than just an exposition of science. The way Ann described to me was that the narrative was an expression of a quasi-mystical reverence of the universe—this big vast thing we had to pay homage to. It was intimidating, but became a wonderful experience. 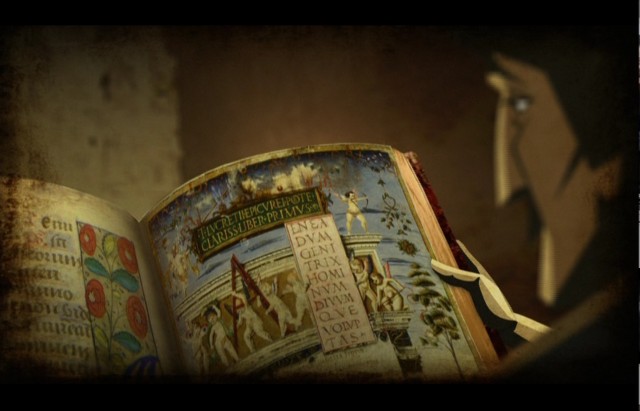 That definitely comes across, especially in the Bruno segment.

Yeah, the characters themselves are very stylized and not multi-dimensional, but they have to be evocative of emotion. The setting and background are all amalgams of photo-real elements. We used a lot of real photographs and brought in a lot of the physical world—there’s real fire and real mist and rain, and different textures from floor patterns. Which is one of the big advantages of using After Effects.

Did you have any say in what kind of characters you were working with or was that something Ann and Seth worked together on? Judging from the trailer, it seems like we do get to see a little beyond the common Western male canon of science.

Everything was dictated to us by Ann; she wrote all the scripts and gave us direction on all the characters. She was very picky about historical accuracy. The amazing thing about her is that she has every detail in her mind as if she lived it. She’ll talk to you as if they were personal friends of hers. She presented us with so much information that the designs couldn’t have come more from her than if she did them herself. 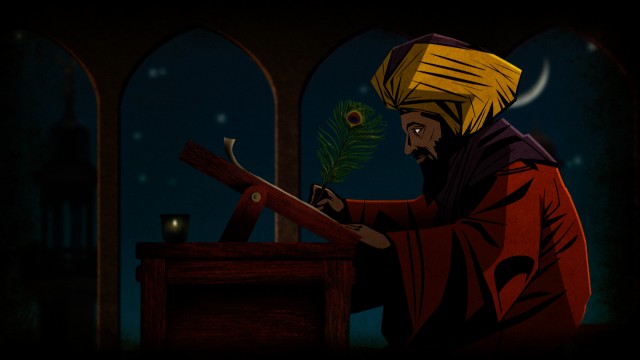 Ann name dropped a lot of big names in the cast of voice actors, like Richard Gere and Marlee Matlin. Were you involved in the casting process? Were you guys always looking to get bigger names?

No. Actually at the beginning, we were probably trying to convince them not to use so many big names! The voice acting community is already so vast and talented. And having worked with Seth for so long, the quality of voice acting is something that Seth is so attuned to, and so often the big name celebrities don’t make the best voice actors compared to others—including Phil! [I had mentioned to her that I’d recognized Phil Lamarr’s voice in the first episode immediately, because I’m a giant dork.] Phil is so versatile and has done so many different types of voices. Not that many people know that Seth is in the first episode, either, and that might have been a mistake on my part. But he was amazing. You really don’t know it’s him from listening.

It’s definitely hard to tell. I have a lot of friends who’ve been questioning me about Seth MacFarlane’s involvement, who don’t see how he lines up with Cosmos. But he really makes it work so well. He seems like such an interesting, integral part of the process.

Right. He’s the only reason the show is what it is, and he has such an enormous love of the material. Anyway, when you have a new show, the instinct is to want to use “name” actors. But I think we had a mix of both. You know, Patrick Stewart, for example, is a regular on American Dad; we’ve used him many times. He’s almost a go-to. I would like to use him for any British character, because he’s so game and he’s so good—and funny. I’d use him for every voice.

[From here the conversation strayed a bit into some of Vallow’s previous work. I’d also mentioned previously that I’d been a fan of Johnny Bravo growing up.]

It was one of those formative shows, you know? You’re going to have to deal with this type of dude, so you might as well study the enemy.

[Laughs] It’s interesting: when I was working on it in ’96, ’97, I didn’t really appreciate it. At the time, Cartoon Network was switching from airing reruns of old classic cartoons like The Flintstones and coming out with their original shows—Dexter’s Laboratory and The Powerpuff Girls. Johnny Bravo was dismissed as being puerile and mediocre, with a simplistic animation style. But I hear so much from younger people who just love it.

I think it’s that a lot of those shows are smarter than people gave them credit for. Like, I see a lot of people talking about the Powerpuff Girls as being so formative for their current mode of feminist thought, because they’re these girls who can do anything. And Johnny Bravo’s kind of similar in that the joke is always on this awful, womanizing guy. Wasn’t there one episode where he’s turned into a woman?

I think that might have been. It came back sometime later without the original creative team behind it. But it was definitely more forward thinking than I could have appreciated at the time, and it launched a lot of big careers—like Seth and [Butch] Hartman, who created The Fairly Oddparents.

That one was a little less great for me growing up, what with the evil babysitter named “Vicky” and all.

[Laughs] Well, it definitely did launch some people!

So after Cosmos wraps up, what’s next for you?

Family Guy and American Dad are still going along. We’re on a new network with American Dad, so we’re excited about that. And with Family Guy, we have that big Simpsons crossover coming up.

Cosmos has really been the big project in my life for the past year, though, and since we haven’t premiered yet, I haven’t quite thought beyond it. We still have so many episodes to deliver! But I’m hoping nothing comes up to replace it right away. It was such a privilege to work with everyone, especially Neil Tyson, since I’m a big fan. As hard as it was, it was well worth it. 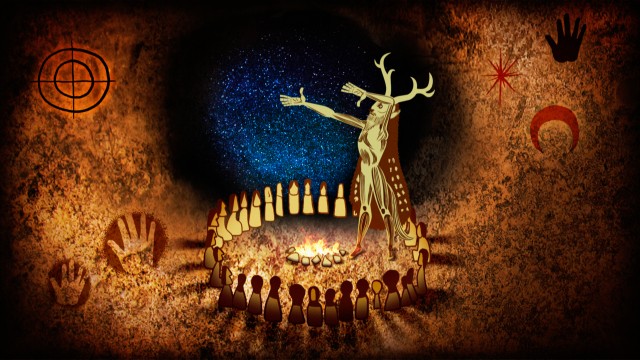 Cosmos premieres across ten different channels on Sunday night, so remember to sit your butt down and watch it live. True Detective can wait, we swear.