This is the Future: Use Your Electric Car to Power Your Home 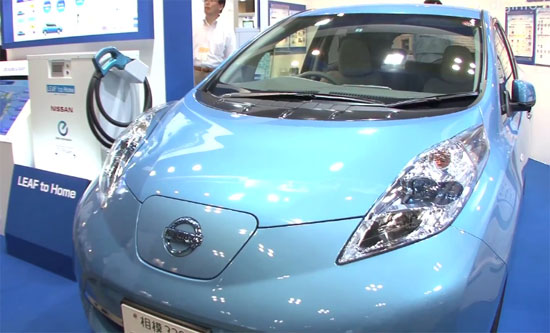 In case you haven’t noticed, we’ve been living in the future for a little while now. So while that means we have semi-affordable electric cars and computers that fit into our pockets, it doesn’t mean that we’ve got all our problems licked. However, a new charging station for the all-electric Nissan Leaf does get us a little bit closer by allowing users to pull power from the car to for use in their home.
The Japanese company Nichicon debuted the charging station late last month, and has been showing it off at tradeshows. Called the Vehicle to Home EV Power Station, the air conditioner sized device can charge a Nissan Leaf to 80% capacity in about 4 hours — or about twice the speed of a conventional charger. However, the really neat thing about the Nichicon charger is that it is the first commercially available charger built with Nissan’s Leaf to Home technology. In short, it allows power to flow in both directions so that the house can power the car and the car can also power the house.

This unique capability has two main uses. The first is that in an emergency situation, the car can be used as a power source for the home. Nichicon says that in this situation, the car’s high-capacity battery is capable of powering a “typical household” for up to two days. Though what constitues a typical household is unclear, even some protection from prolonged blackouts is useful.

More interesting is the charger’s ability to keep the Leaf connected to the power grid as a power source. In this scenario, the charging station recharges the vehicle at night when demand for power is lower, and draws some power from the vehicle during the day when demand for power peaks. This could not only help lower electricity bills for a household, but could also improve efficiency across the grid.

Of course, how much difference this capability makes has yet to be seen. Moreover, I think some consumers might be concerned that having power flowing out of the vehicle may make it less capable in the long run. Not having enough power to get around is one of the many psychological hurdles that electric vehicles have to erode.

That said, this kind of interconnected smart technology that only uses the power it needs and actually gives back some power that it doesn’t need is truly remarkable. It’s something that’s been talked about for years, and is finally coming to market. Hopefully we’ll see more clever devices like this in the coming years.