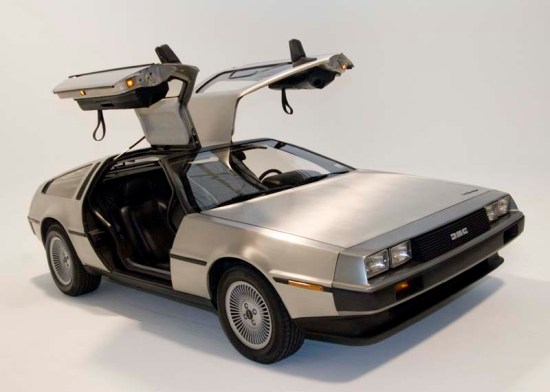 So, after reading that headline you might be a little confused since, famously, the DeLorean Motor Company collapsed under the weight of an overly ambitious production scheme and a drug smuggling sting operation. However, that apparently wasn’t the end of the iconic stainless steel vehicle famously used in Back to the Future, as the remaining parts and distribution rights were secured by a Texas company. Reborn, the new DeLorean motor company is now planning to offer an electric version of the car in 2013. Friends, this is amazing.

Though only in prototype, the electric DMC-12 aims to follow in the footsteps of the Tesla roadsters. As such, the cars won’t be consumer priced — expect something more along the lines of $90,000 per vehicle. But these won’t be just for show, since the company is hoping to not only match the (somewhat lackluster) performance of the original, but perhaps to even improve upon it. The car is also expected to need far, far less than 1.21 gigawatts to get going.

The car is the brain child of Stephen Wynne, the owner of the new DeLorean Motor Company. The current prototype can go from 0 to 60 in 4.9 seconds and runs on a direct current engine. Despite ditching the original engine, the addition of batteries and an electric motor have raised the weight of the vehicle to 200 pounds above the original weight. Amazingly, the current prototype can get some 70 miles per charge, and closer to 100 when driven efficiently, despite the extra weight.

Partnering with a California company called Flux Power (how apt!), Wynne hopes that the final version of the so-called DMCEV will be even more impressive. Using a newly developed resin underbody, the company hopes to trim down some of the extraneous weight. Moreover, the addition of an AC, as opposed to the DC engine in the prototype, would also improve efficiency and extend the mileage of the vehicle even further.

As they have with their custom built and refurbished DMC-12s, the company will offer modern amenities such as iPod connectivity and GPS navigation among other improvements.

In their ride with the vehicle, Jalopnik points out that the all-electric upgrades could actually allow the decades-old design of the DMC-12 to reach its full potential. They note that since the car already carries most of its weight in the back — where the engine usually sits — placing the batteries in the same spot works extremely well in the electric version. Moreover, they present the possibility that the EV version can capitalize on the remarkable aerodynamic design of the car.

Of course, all that pales in the face of a nearly $100,000 price tag. However, as a long time fan of the admitedly somewhat ridiculous vehicle, it warms the deepest, darkest cockles of my heart to see new work being done on the DeLorean. In case you’re just as much a fan as me, you can purchase a new, custom-assembled DMC-12 from Wynne’s company using stockpiled original parts for around $57,000. The $33,000 you save by not going to electric can help offset the crippling cost of gasoline and insuring your beautiful new ride.

If you’re an absolute purist and can’t bear the thought of having too many electronics under the hood of your DMC-12, perhaps I can interest you in a gold-plated vehicle from 1981 that most recently sold for around $250,000.