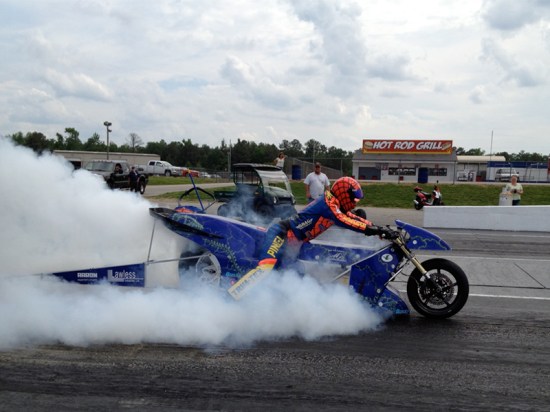 Larry “Spiderman“ McBride rode into the record books last Friday when he made a quarter mile run on his Lawless Electric Rocket bike in 6.94 seconds at a staggering 201.37 miles per hour. The super fast run not only set a record for fastest electric motorcycle — a category I didn’t know existed prior to this morning — but also a record for electric vehicles overall.

Of course, it took some serious power to get McBride over the finish line in that record time. His bike, a joint project between Lawless industries and Orange County Choppers, packs a mean punch: Running at 355 volts, 4,000 amps, and 14.2 kWh. All it took was a 250 pound battery and 1,340 horsepower GE electric motor.

Just a happy reminder to people who gripe about how electric vehicles will never be powerful enough.

While the record is pretty amazing, the real jaw-dropper is watching the bike take off. Because it’s electric, it’s almost silent as McBride prepares his run, and just takes off without any warning. I don’t know if this is the future we’re looking at, but it’s pretty damn impressive.