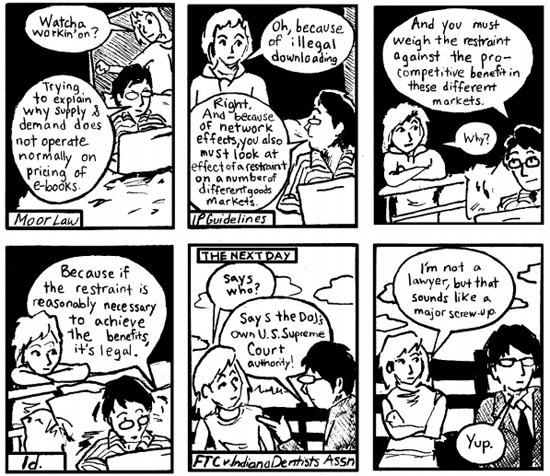 The law is a complicated subject. When writing briefs for the court, folks tend to be rather verbose. This stems from the fact that, they’re often lawyers, and they usually want to eliminate any possibility of confusion. Enter Bob Kohn. When Kohn was informed that he could only submit five pages for his amicus brief in response to the Department of Justice‘s proposed settlement over eBook price fixing, he decided to submit the brief as a comic.

It was U.S. District Judge Denise Cote of Manhattan that ordered Kohn to limit his argument to five pages, thus spawning what Kohn calls a “graphic novelette.” Other than being a somewhat unusual entry, the comic supposedly fits all required guidelines. Due to the format, it also just so happens to be easily understood by folks that might have otherwise turned their noses up at a more traditional legal brief.

After the usual legal headers, the comic, which was illustrated by a friend of Kohn’s daughter, argues that the Department of Justice made a bad call in the case. It begins by noting the usual economic forces of supply and demand don’t operate in a normal fashion when it comes to the pricing of eBooks. The comic version of Kohn, in a dialogue with a comic version of Kohn’s daughter, goes on to explain that illegal downloading throws a wrench in this operation.

In a nutshell, Kohn states that Amazon‘s eBook pricing is predatory, and that they sell eBooks below marginal costs. Those accused of price fixing, according to Kohn, were simply attempting to countervail Amazon’s suspect pricing schema. Kohn comes to the conclusion that the court needs to take a harder look at the whole thing, as they just might find that Amazon was in the wrong.

Ultimately, if Kohn’s intention was to receive attention, it’s certainly worked. Given that it’s meant as a legal brief, we’ll forgive the man for essentially making a list of bullet points into a comic rather than doing something a bit more fancy.