R.I.P. Michael Hart, Inventor of the eBook and Founder of Project Gutenberg 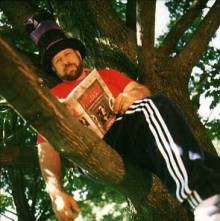 On September 6, Michael S. Hart died at his home in Illinois at the age of 64. You may not know the name, but if you’re on this site you’ve almost certainly been touched his legacy. In 1971, Hart created the world’s first eBook when he transcribed a copy of the Declaration of Independence and uploaded it to the University of Illinois fledgling computer network. In later interviews, he said he would have emailed it to everyone on the system, but doing so would have crashed the network.

This simple act would become the foundational moment for Hart, who would go on to found Project Gutenberg — the largest repository of free eBooks on the Internet. While his work is often eclipsed by the sleeker, sexier offerings through the Amazon and iTunes eBook stores, his aspirations were of the highest order. His mission statement for the site reads:

Encourage the Creation and Distribution of eBooks

Help Break Down the Bars of Ignorance and Illiteracy

Give As Many eBooks to As Many People As Possible

Thank you, Michael Hart, for making bringing these books to world.