Spider Jerusalem’s Camera-Glasses Exist and Lady Gaga Has Them 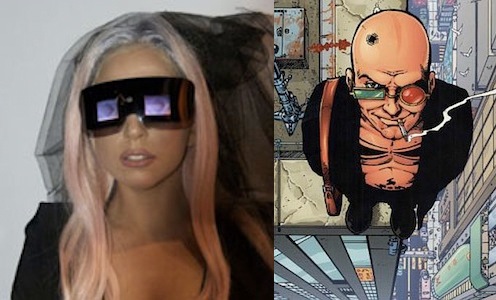 Rogue journalist Spider Jerusalem had a set of oddly-shaped glasses that snapped pictures. I’ve always wanted them even if they didn’t snap pictures, simply because Spider Jerusalem is awesome, rogue journalism is awesome, and ridiculous-looking glasses that let me display my love for Transmetropolitan would be awesome. It turns out Polaroid actually made a set of glasses that snap pictures, which is awesome, but they’re the product of Lady Gaga’s tenure as Polaroid’s creative director, which is less awesome, but not nearly as less awesome as the glasses being called “Grey Label by Haus of Gaga.” Oh well.

Unveiled at CES this year, the GL20 sunglasses can take pictures and shoot video with an embedded camera display, and the data is stored in memory contained inside an earpiece. The data can be transfered via Bluetooth, or the earpiece can be connected to a USB printer. Interestingly, each lens sports a screen which can play back the captured images.

Lady Gaga claims the inspiration for the glasses came from a previous set of glasses she wore for a concert, which were made out of iPod screens, but we all know she just secretly doesn’t want to give credit to a rogue journalist (or, you know, Warren Ellis). She also unveiled a mobile photo printer, the GL10, which can connect to any Bluetooth-enabled phone, aside from Apple’s iPhone, which Gaga claims was an “Apple limitation.”

So, the difficult part of creating Spider’s camera-glasses–the actual picture-taking functionality–has been achieved, and I can only hope Polaroid will soon shove all of that tech into the proper (read: Spider’s) form factor.