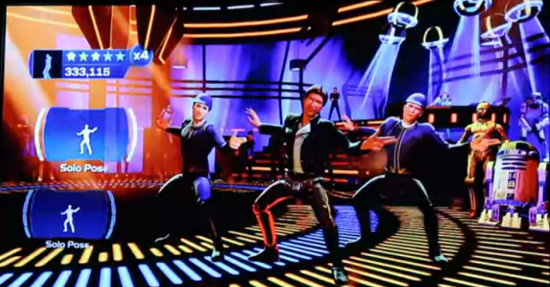 Ever since it was announced that Kinect Star Wars would have a Galactic Dance Off mode, there’s been a certain amount of anticipation as to what exactly it would be like. That is to say, how bad would it be, and what particular flavor of bad. We got a few tastes that gave us a general idea what it would be like but now I’m happy to present “I’m Han Solo,” a Kinect Star Wars dance in its hilarious entirety. If you find yourself rapidly snapping back and forth between feelings that it is the best thing and feelings that is is the worst thing, have no fear; it’s only natural.

The way Galactic Dance Off footage consistently manages to toe the line between abject failure and hilarious parody is pretty impressive actually. Aside from the fact that, well, Han Solo and Lando Calrissian are dancing with Imperial officers in Cloud City, the attention to detail is pretty impressive. You’ll recognize the DJ, for instance, the dance moves are all pretty aptly named, and the set seems pretty faithful, aside from the disco ball. It’s oddly reverent, in a way.

That said, the fact that someone decided to rhyme “put it on my side” with “Wookie by my side” is pretty egregious in any context, and the “Solo” pose is disconcertingly splay-legged. I can’t help but think that Galactic Dance Off’s major problem is that it will never really transcend its existence as an official licensed product. It’s hard to shake the feeling that something this “real” is meant to be taken seriously; if it were a fan production, I think we could all have a good wholesome laugh. But the idea that anyone would pay for this, even — no, especially — out of some sense of irony, is sort of troubling. But whether it causes to grapple with the nature of irony and licensing or not, one thing is for sure: It’s hilarious. I think we can all agree on that.