Hilarious Bug in Star Wars: The Old Republic Prevents Damage When You Dance 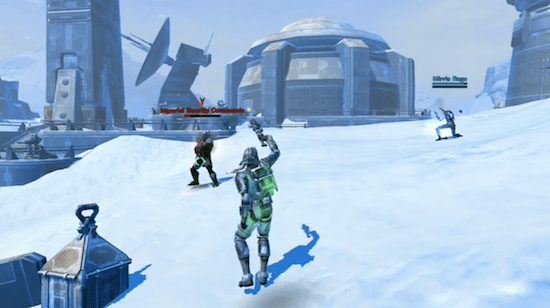 Yes, every single MMO nowadays has an array of dancing animations, but BioWare’s venture into the kill-ten-rats arena, Star Wars: The Old Republic, is the only MMO where that simple, intended-to-be-benign dancing animation prevents a whole bunch of damage by consistently interrupting an enemy’s casting. Not working as intended, as you may have guessed, and BioWare was rumored to be handing out bans for those caught abusing the exploit, but BioWare has responded to those claims saying that no, they aren’t banning anyone.

SW:TOR has three different dance animations, /dance, /clubdance, and /getdown, and thankfully, the enemy just can’t maintain focus when your character is busy getting down — the appropriate one of the three to cause havoc. BioWare is none too happy about this, and the rumor that BioWare is banning people caught abusing the exploit was proven to be fake when they issued a statement saying that no, they aren’t banning anyone, which is great, because look how funny it is:

BioWare’s statement saying the ban rumor is a hoax has muddied up the existence of the exploit just a little, though, as they don’t directly and explicitly claim the exploit exists, but unless the above video is a ridiculously elaborate hoax, the exploit seems to be a real thing at this time. One can only assume BioWare is working hard to quash it, as interrupting enemy casting would pretty much ruin any MMO.