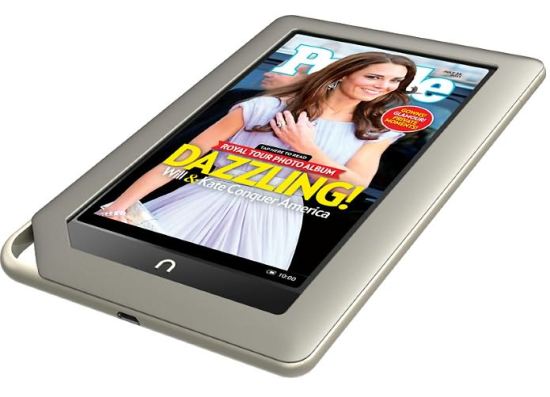 Though analysts had been expecting it, Barnes & Noble booksellers announced a new addition to their eReader line today: The Nook Tablet. However, calling this device an eReader is something of a disservice, as this latest Nook aims to be the hand-held multimedia device that also lets you read books on it. Now where have I heard that before?

Here’s what you need to know about the new device. The Nook Tablet packs a full-color, seven-inch multitouch screen, with HD video playback apparently in mind. It’s a svelte .48 inches thick, weighing a mere 14.1 ounces. Like a true tablet device it is Wi-Fi capable, though NOT apparently 3G. It does support Flash, which is nice for folks looking to get out from under the iOS hegemony. The device will retail for $249, putting it south of the iPad and north of the Amazon Kindle Fire. Though announced today, B&N will not being taking preorders for the device until November 18.

For actual book reading, the device supports the EPUB format as well as PDFs and a host of others. The battery seems robust enough at 11.5 hours of reading time per charge, and 9 hours of video watching. In terms of memory, the Nook Tablet comes in one size: 16 GB. It is, however, expandable thanks to a MicroSD slot.

Despite running on the Android 2.3 OS, Nook Tablets will not have access to the full suite of Android apps. Instead, B&N seems to be curating apps for their device. While this kind of restriction may be annoying, the walled garden approach has worked well for Apple, and this might shield Nook users from the fractured world that is the Android marketplace. B&N is currently offering a diverse spread of applications through their store and will be pre-loading some apps onto the devices.

Of those pre-loaded apps, Hulu Plus and Netflix are particularly noteworthy. Not only does it signal a larger audience in mind for the device, but B&N have gone out of their way to highlight video quality on the Nook Tablet. According to Mashable, Netflix CEO Reed Hastings said that streaming movies from his service will look better on the Nook than on the Kindle. Dems sound like fightin’ words.

With the introduction of the new Nook Tablet, B&N has also slashed the prices across its full line of eReaders. The Nook Color, former flagship of the Nook family, saw a nice price drop to $199 — which, incidentally, puts it at the same price as the Kindle Fire. B&N also continues to offer a slightly refreshed Nook Simple Touch, which uses a touch-sensitive black and white E-Ink display, for a quite reasonable $99. Interestingly, the full line of Nooks seems to have managed to bring these prices without needing to run ads on the low-end machines, which certainly could give it a leg up on the discount Kindle models.

Though B&N cannot offer the same kind of seamless access to the multitude of Amazon web options — like movies, books, music, etc. — it is playing to its own strengths. The announcement of the Nook Tablet was followed quickly with word that brick and mortar B&N stores would feature a Nook nook. Here, users can have their devices serviced for free, and would-be customers can get a hands-on with the device. It’s a smart move, albeit not guaranteed to give them an edge over the omnipresent Amazon.

In addition to the Nook nook, B&N is offering bonuses to Nook users who bring their devices to any of the 40,000 stores the company operates. Limited eBook book previews, food incentives, and free WiFi can be yours provided you bring your Nook.

While the Nook brand is almost certainly a dark horse candidate in the world of tablets, the Nook Tablet and the overall refresh to the Nook line are certainly making it look like a strong contender. Which is interesting, because while many consumer electronics companies have struggled to compete with the iPad, it’s been two booksellers — Amazon and B&N — which seem to be making the strongest play.

And before anyone discounts B&N as a serious competitor simply because they have more traditional brick and mortar roots, it’s worth noting that B&N more or less stands alone in that market now. They’ve proven themselves to be strong force capable of weathering economic and paradigmatic shifts from consumers. Their continued investment in the Nook is a reminder to the rest of the world: B&N is in this to win it.