Kickstarter Has Raised Over $50 Million for Games This Year Alone 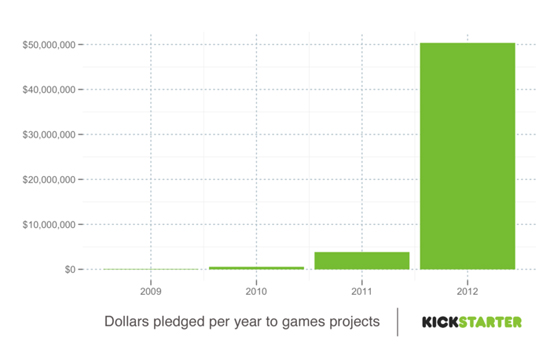 Kickstarter loves games. Specifically, the company loves their Games category. As of August 31st, the Games section of Kickstarter has seen $50,330,275 pledged so far this year to the various goods and services it represents. Considering that the amount pledged for 2011 came to a grand total of $3,615,841, it’s a staggering increase. As much as Kickstarter loves games, it looks like games just might love Kickstarter too.

Kickstarter’s breakdown on their blog attributes much of this growth to the Double Fine Adventure project. Double Fine managed to make developers aware that, hey, maybe not everyone has to go through a publisher for funding. Since Double Fine’s debut in February of this year, pledges in the Games category have continued to increase. 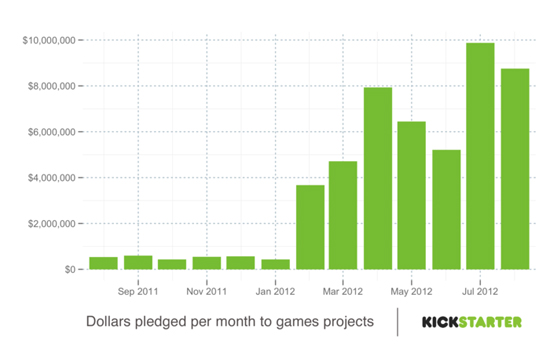 That’s not just video games, either. Kickstarter’s Games category actually includes board, card, and various other types of games. For example, Mobile Frame Zero: Rapid Attack falls under the Games category, as it’s a game played with mech units built out of LEGO. Even this subcategory has seen considerable increases this year.

The company also notes that users who back something in the Games category first go on to become some of the most prolific backers. The number of projects for a Games backer averages out to 2.43 projects as compared to the average of 1.78 across all others. Gamers want more games, it seems.

Interestingly enough, while video game projects often see far higher pledge amounts, board and card games are successfully funded more often. This is likely due to the nature of the project, as a video game costs far more to make than a board game. It’s one thing to make a board and design some rules for it; it’s quite another to program the board, rules, players, scenario, and everything else involved.