The Enterprise-D Bridge Is In Shambles. Want To Help Fix It Up? 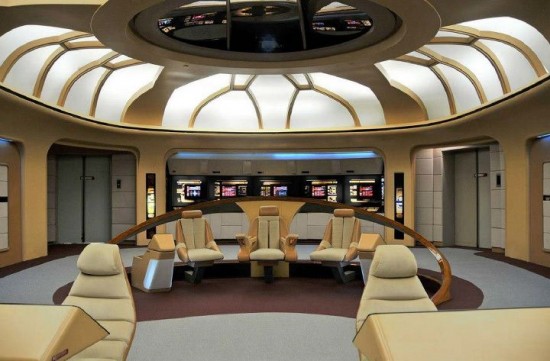 Want to do your distinctly nerdy good deed for the day? How about this: You can help save the bridge of the Enterprise-D from Star Trek: The Next Generation, and you don’t even have to engage saucer separation to do it. The remnants of the storied helm of the ship that played home to Picard, Riker, Data, Troi, and the never-ending antics of Wesley Crusher are currently clogging up the backyard of a dutiful Trekkie in Sherman Oaks, California. He’s saved the bridge from being tossed on the heap and melted down as scrap metal, but that’s only the first step. The bridge is trashed — like, fight with the Borg trashed — and he’s looking for help to restore it to its former glory. That’s where you come in.

Unfortunately, this isn’t the original set piece on which Star Trek: The Next Generation was filmed. That set was thoroughly totalled during the filming of Star Trek: Generations, just in case you were looking for another reason to loose a deep sigh over the fact that Star Trek: Generations was a movie that got made. This Paramount built replica is the closest thing we have to an original bridge, and on that merit alone it is worthy of our consideration. This bridge deserves a better fate than a place on the scrap heap of history.

The restoration will have a Kickstarter that you can throw money at in the near future, though it won’t be up until a reliable estimate for the cost of the restoration has been made. We can’t wait to see the perks associated with this project once that is up and running. A few suggestions? We would gladly pitch in at the $500 level for the chance to chide Wil Wheaton for something while standing on the bridge. We could probably go to $750 for the chance to inexplicably defeat Michael Dorn in hand-to-hand combat while standing behind the captain’s chair.

In the meantime, you can show your support on the project’s Facebook page, where you can get more details about the restoration and see photos of the process. You can also get a look at all the Trekkies who have already volunteered their time and skills to pitch in on the project, which is a really heartwarming sight.