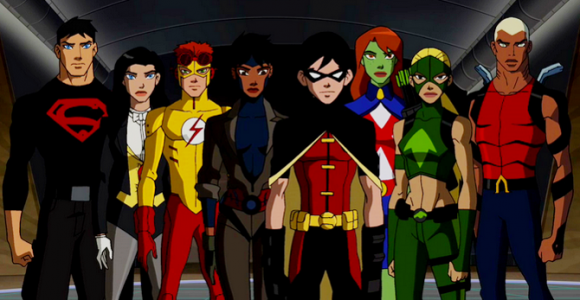 I think we need to go over how Kickstarter, businesses, and ownership works again.

As soon as I heard this story, I knew it was ridiculous. A group called “my Show Must Go On,” SMGO for short, recently made an attempt to bring back Cartoon Network’s Young Justice and Green Lantern: The Animated Series. You may remember the DC Nation shows being cancelled, meant to be replaced by the revamped Teen Titans Go! and Beware the Batman. Well, apparently they weren’t just working on bringing those two shows back, but were actually trying to be a crowdfunding site, much like Kickstarter, specifically for cancelled television shows.

Anyone else see a problem with that?

Yes, a lot of fans (myself included) were upset with the cancellation of Young Justice and Green Lantern but…you can’t just crowdfund someone else’s property without their permission. That’s not how this works. Veronica Mars had a successful Kickstarter because the creators of the show got the go-ahead from the studio and fans jumped on board.

Trying to explain how a crowdfunding website for cancelled shows would work without creators or studios involved is, as you might expect, tricky. “Dave” from SMGO writes, “Yes, actually – despite what you might have heard, we do have an industry adviser, and we’re actively reaching out to production studios through back channels.” He explains their BETA was unexpectedly inundated with users and they had to bump up their timeframe for exposure. Well yes, if you give devoted fans hope they might see a resurgence of their favorite property, they’re going to get excited. This is the internet.

To be clear, I don’t believe SMGO has any evil intentions here (or at least I hope they don’t) – they explain any money given through PayPal would go directly to said studio once a deal has been made – but I do think they are biting off much more than they can chew. When it comes to getting Young Justice and Green Lantern back through crowdfunding they write:

Nothing is certain, and nothing will be certain until we’re fully in contract with them. We likely will be meeting with them during this next week to hammer out the final details, including an official press release confirming their approval of these projects.  We will not enter into the funding stage until we have everything perfect.

Ok, fair enough, they said they are trying to get a contract with Warners. But an update on May 3 was not what fans would have liked to hear:

Hey all, I’ve been trying (all day) to come up with a slightly better way to say this, but I’m just going to give it to you straight. Warner said no – they don’t think we can reach our goals – do you believe that?

A company like Warner Bros. getting into business with a startup like this seems far-fetched. At least in this point in the game. While Veronica Mars showed it could work, companies are not prepared to go the crowdfunding route to produce series, not to mention cancelled series. And it’s important to remember, Young Justice and Green Lantern weren’t axed because Warner Bros. didn’t have enough money to produce them. They have tons of money. Young Justice and Green Lantern were cancelled because their toys didn’t sell well enough to make continueing the show worthwhile. That’s just how animated shows work.

But Dave at SMGO isn’t taking Warner Bros. no as the final word. He posted a video explaining they are going to try and raise the production costs, somewhere in the vicinity of $10 million, for Young Justice. But that’s where the conversation ended. Warners said no, he said they’re going to try and show them the money could be raised anyway, but didn’t mention anyone making specific donations.

We’ll keep an eye on this but word to the wise DC Nations fans: unless a studio publicly makes an announcement of support for something like this, do not give your money to anyone.