And The Finally Tally For The Veronica Mars Movie Kickstarter Is… 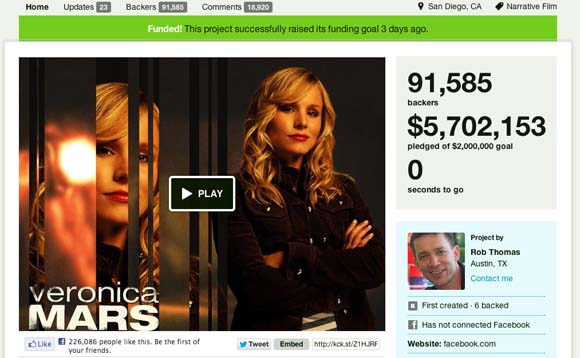 It was a crazy pipe-dream Veronica Mars fans never thought would actually come true. A Veronica Mars movie is happening because of fans but we knew that ten hours after the Kickstarter launched. “WE DID IT, MARSHMALLOWS! With six hours to spare, we shattered the last record we were aiming for, passing 87,143 to become the Kickstarter with the all-time highest number of backers,” reads the Kickstarter page. Yes, they managed to raise $5,702,153 thanks to 91,585 backers. It’s now also the third highest-funded project in Kickstarter history. Creator Rob Thomas tweeted, “The movie title is going to simply be VERONICA MARS. The sequel will be VERONICA MARS: THE PASSWORD TO LOCKSPUR LANE. Or ELECTRIC BOOGALOO.” And Veronica Mars herself, Kristen Bell tweeted a minute before the close to say, “i love you all. for real. thank you.”

Personally, I can’t wait for Mars Investigations to be back in business. Next stop, SDCC, then…the world!