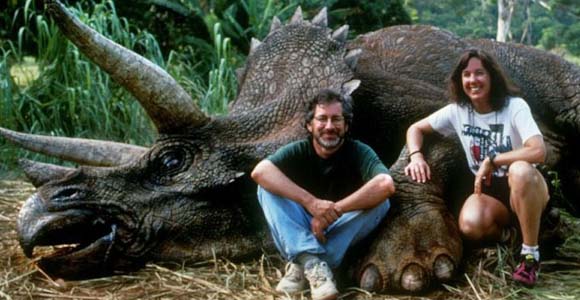 Ok, I’m not gonna lie. If you asked me to choose between dinosaurs and space, I’d have a really tough time deciding.

The last we heard from Kathleen Kennedy on the state of Jurassic Park 4 she said they were, “Writing, writing, writing. It’s really hard to keep these things going when there’s an expectation and a desire by the public and the audience to keep certain franchises going.”

Rick Jaffa and Amanda Silver (Rise of the Planet of the Apes) are penning the screenplay and although there’s no director yet, Steven Spielberg is officially signed on to produce. Its release date is set for June 13, 2014 but Kennedy will no longer play a part according to producer Frank Marshall. He’s also her husband so you can take this as confirmation.

@jackdelamare No, Ms. Kennedy has moved onto Star Wars and will not be producing JP4. She’s traded raptors for TIE fighters.

That’s a bummer considering she’s worked on the previous three Jurassic Park movies, but totally understandable. The new Star Wars films seem to be taking up the entirety of fans’ lives so I suppose the people actually working on them are quite preoccupied. And after all, she was the one to convince J.J. Abrams to direct so she kinda had to be all in after that.

(via /Film, image via The Playlist)